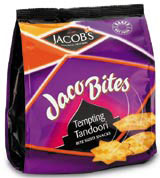 Jacob’s is aiming to compete with Kettle, Doritos and Pringles for a bite of the lucrative adult snacking market with the national roll-out this week of JacoBites.

Bloom Design has created the identity and packaging for the product in a project worth a five-figure fee to the consultancy. It was appointed on the strength of previous work for Jacob’s.

According to JacoBites brand manager James Crabb, the product sits in a category of its own and will target ‘group grazing occasions’, such as watching videos.

It is positioned as a snack rather than a cracker, as the former is consumed more often, says Bloom creative director Gavin Blake, who worked with senior designer Trisha Steel on the project.

‘Rich crackers are usually eaten only once or twice a week. JacoBites is hoping for greater consumption than that,’ he says.

The group was briefed to introduce ‘snacking cues’ to the packaging rather than utilise traditional cracker packaging such as boxes, Blake says.

‘We have designed a bag rather than a solid box and used bright primary colours, drawn from crisp packaging language,’ he explains.

The snack is available in three flavours: Tempting Tandoori, Passionately Pizza and Blazing BBQ. Following a successful trial period in Asda stores, it will be rolled out nationwide this month across major multiples, including Sainsbury’s, Tesco and Safeway.