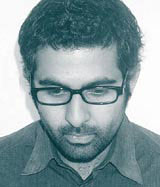 Three Digit directors, including founding partner Simon Sankarayya, are leaving the group to set up a breakaway consultancy, All of Us, it has emerged this week.

The move leaves Digit creative director Daljit Singh holding the reins at the group. Singh, who says the split was amicable, has appointed Perfunktory co-founder Scott Lyons as head of strategy and planning. He is about to appoint a creative head and will also promote internally to replace the team.

‘Obviously I’m sad, [but] the guys want to do their own thing. We may work together on projects in the future – it makes sense to collaborate with people you know and trust,’ Singh says.

All Of Us launches officially in October. It will focus on interactive design, in particular its application across wider disciplines such as product, interior and identity design and architecture.

Sankarayya admits leaving Digit was ‘an incredibly hard thing to do’. At All Of Us, he becomes art director, Mathias is interaction director, Cristea is projects director, Gerrard becomes business and strategy director and Stretton design director.

‘We want the freedom that comes with working in a small team again, and to initiate projects ourselves,’ says Sankarayya.

‘Working at a larger consultancy often means you spend most of your time delegating, not designing,’ he says.

He, Cristea and Mathias will work out their notice to complete existing projects, adds Sankarayya.