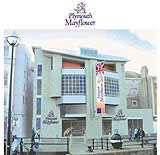 A multi-million pound visitor attraction in Devon, The Plymouth Mayflower, will open next month with interiors, branding and promotional material by John CsÃ ky Associates.

John CsÃ ky Associates has been working on the project since 1998, when it wrote the initial storyline for the museum’s content, which was used to gain funding for the project from the European Regional Development Fund and other agencies. It was appointed at the end of 1999 once funding of £2.5m had been secured.

The Plymouth Mayflower is designed to celebrate Sutton Harbour’s 800 years of maritime history. The attraction is aimed at a wide range of potential audiences, from foreign exchange students and school children to American tourists and local residents.

One of the biggest challenges of the design brief was the very long and complex story it is trying to get across, creative and managing director John CsÃ ky says.

The museum is situated a few metres away from the steps from which the Pilgrim Fathers set sail for America in 1620.

The exhibits are housed over four floors and divided into chronological clusters that combine historical artefacts with a variety of media and interactive elements. For instance, a cluster might contain an artefact from a ship alongside an historical painting of it and a three-dimensional model of the ship, CsÃ ky says. The idea behind the design is to bring out the three-dimensional aspect of the stories.

Songbird created audio-visual material and Sutton Vane Associates was responsible for the lighting.