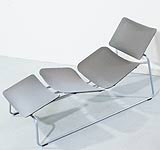 For all the component countries’ efforts over time, Scandinavian design is still perceived as blonde bentwood furniture with crafted glassware and nubbly textiles thrown in for good measure. But life has moved on since the 1930s when the minimal interiors ‘look’ became the rage and though the forms may be familiar, there’s less craft and more design in Scandinavian ware. And we love them.

The revival of interest in Scandinavian design in the UK – if, indeed, it ever went away – shows in the success of specialist shops such as London’s Skandium, now also with a concession within department store Selfridges in London and in Manchester’s Trafford Centre. Most people interested in design will have a bit of Alvar Aalto’s work tucked away or a piece of Swedish glass, while connoisseurs favour the intriguingly decorative furniture and textiles of ‘adopted’ Austrian architect Josef Frank.

Sweden is particularly aware of the appetite in Europe and further afield in countries such as Japan for its classic designs. By buying into the past its customers are acquiring timeless design and what has become comfortable good taste. But Swedish manufacturers and designers are also aggressively touting new products around the world.

Last year, for example, global economic traumas notwithstanding, furniture exports were up 3 per cent to 11.5bn kroner (£66m) at a time when total Swedish exports declined by 3-4 per cent, says Jon Klegard, managing director of the Swedish Furniture Industry Association.

Norway and Germany are the biggest markets for furniture and the latter’s ailing economy is causing concern. But with Ireland, Portugal, Poland, The Netherlands, England and France buying significantly more than before and the push on to attract Japanese custom, the Swedes are confident they can pull it off.

This month’s Stockholm Furniture Fair showed no let up in the penchant for light wood. Companies such as Swedese, Piiroinen and GÃ¤rsnÃ¤s gloried in it. But there was lots of colour too, largely in upholstery for lines such as Love Arben’s Tuesday chairs for Lammhults and most of Offecct’s seating lines.

And though there is a tendency towards home-grown designers, other nationalities are there. At Swedese, for example, Brits Michael Young, now resident in Iceland, and Milan-based James Irvine showed the blonde wood Lemonade chair and X tables respectively. They shared the stand with Japanese designer Yuriko Takahashi, as well as local heroes MÃ¥rten Claessen, Ola Rune and Eero Koivisto.

But while cool elegant lines and bold fabrics still dominate Sweden’s contemporary furnishings exports, the numerous modern furniture shops in affluent Stockholm portray a brighter, more quirky image. This is embodied in the work of Snowcrash, a collection of designers sometimes compared to Dutch collective Droog Design for its avant garde approach to design and materials.

On the retail front, at the high end of the market you have Svenskt Tenn, set up in 1924 by pewter designer Estrid Ericson and a showcase for the work of her friend Frank. Now owned by the Kjell and MÃ¤rta Beijer Foundation, the shop is almost a museum featuring Frank’s floral fabrics and crafted furniture. But managing director Yvonne SÃ¶rensen is commissioning young Swedish designers to create new lines.

Glassware brand Kosta Boda is constantly refreshing its colourful collection of contemporary designs, displayed in a new shop, designed by Claes von Hauswolff of BAS Retail, with Per SÃ¶derberg and Andreas Fornell of Per SÃ¶derberg Arkitektkontor, alongside the more traditional clear glassware by sister brand Orrefors.

Then there is Apslund, stocking an eclectic international mix from Jasper Morrison rugs to HÃ¤berli’s striped egg cups. David Design has an oddball mix of embroidered floral bags, fashions and furniture, while ‘modern antiques’ specialists offer scuffed models of every classic chair or light fitting you’ve ever hankered after.

A Brit might marvel at the number of design shops in a relatively small city such as Stockholm, but the country that gave us Ikea (which has 50 per cent of the local market for furniture) doesn’t see contemporary design as elitist. The vast ten-year-old Room store in an old factory offers ‘affordable’ housewares to discerning customers, often of its own design.

For a UK visitor, Room, despite initials standing for ‘Reflections of open minds’, is more like ‘Cargo meets Habitat’ than the positioning between Ikea-owned Habitat and The Conran Shop its co-founders claim. But its innovations, from having a cafÃ© in the store to theming its merchandise each season, are beyond doubt and its success within Scandinavia shows in its expansion within Sweden and soon to Copenhagen in Denmark in 2003 and then Helsinki in Finland.

With successes like these and a government scheme to pay young designers a short-term wage to get them started you begin to understand why the Swedish design scene is thriving. The local market is there.

But the current global push looks set to continue, and it isn’t just limited to textiles and 3D design. Local pundits point to the music business, with Swedish designers working on CD design and videos with the likes of Madonna, as a major growth area for local talent.

So watch out. We could be faced with a Scandinavian invasion.