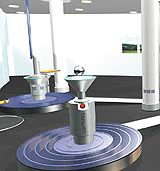 The 700 metre squared space, which opens to the public on Saturday (23 February 2002), is designed to act as a ‘showcase for Audi’s commitment to design’, a spokesman says. It follows centres in other cities, but London will set the standard for future ones, he adds.

The space will incorporate temporary exhibitions, including an interactive display, created by A Vision, which is designed to demonstrate the different properties of aluminium.

Visitors will be able to dangle themselves from a Karabiner mountaineering clip to show the material’s strength, and play with the controls of an air-jet above which will be suspended an aluminium sphere, demonstrating its lightness.

The forum will also incorporate installations produced from Audi car components by Jam Design into non-automotive products, including lights and a coffee table (DW 4 October 2001).

‘Our aim is to bring to life Audi’s design expertise through hands-on experience,’ the spokesman says. ‘Nothing about the forum will feel like a car showroom.’

‘We want to show how materials can be used in an innovative way and allow visitors to immerse themselves in what we believe the Audi brand stands for,’ he adds.

Erikkson’s interiors feature a glass wall, running from basement to ground floor, lit by a computerised lighting system. It is created to change the atmosphere of the space, depending on the exhibition on show.

At street level, the forum will house an Internet cafÃ© and a merchandising boutique in addition to the main exhibition and events area. The basement will incorporate an area allowing consumers to customise their own car.

The temporary exhibitions will vary between Audi and non-Audi related work, the spokesman adds.

Head of the Audi Munich design studio Romulus Rost will open the exhibition space on Friday.