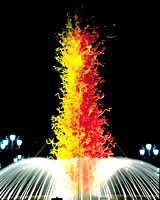 Glass is the new rock ‘n’ roll, or so it would seem from the proliferation of designers trying their hands at this delicate material.

From Emmanuel Babled’s Smash project, which involved names such as James Irvine and Richard Hutten, to Ettore Sottass’ precious one-off pieces, both shown at the Milan Furniture Fair this April, 3D designers are discovering the potential of ancient glassblowing techniques and making them their own. Yet many of them should probably acknowledge a debt towards Dale Chihuly, the American-born artist who has made the beauty of glass his lifelong mission. For over 30 years, Chihuly has been at the forefront of experimentation, producing breathtaking installations that combine the most exquisite Venetian techniques with a daring sense of proportion. And with excellent timing, The Victoria & Albert Museum is staging Chihuly’s first large-scale exhibition in Europe.

Born in 1941, Chihuly initially trained in interior design and architecture. He went on to obtain a master’s degree in sculpture, and one in ceramics. In 1968, he made his first visit to Venice, having been awarded a Louis Comfort Tiffany Foundation Grant for work in glass, as well as a Fulbright fellowship. According to Jennifer Hawkins Opie, curator of the show and author of the book, Chihuly at the V&A, before going to Venice he had written 300 letters requesting some sort of internship on the Murano island, where all the glassworks had been based since the 15th century. Ludovico de Santillana, the son-in-law of Paolo Venini and the director of the Venini glassworks, was the only one he received a reply from, thus sparking a love affair with the island that still continues to this day.

In 1969, Chihuly established a glass programme at Rhode Island School of Design, and in 1971 the Pilchuck Glass School, where he invited the Italian glass masters to share their knowledge and virtuosity with students and other artists. But the relationship with Venice has always been two-way, with two Italian masters, Lino Tagliapietra and Pino Signoretto, prospering under Chihuly’s constant quest for exploration.

Like all glass masters, Chihuly is a team man, or in the words of Opie, ” a circus master”. His studio is largely a collaborative affair, in which Chihuly coordinates multiple projects in Seattle to be installed all over the world. A tragic accident in 1976 has deprived him of sight in one eye, which means that his perception of depth is altered. Since then, Chihuly has become, as Opie writes, “more of a conductor of the orchestras, rather than the soloist or lead violin in the actual blowing sessions”.

The V&A has been courting Chihuly’s genius for a while. In 1999, he was commissioned to create the V&A Chandelier, a stunning ice blue and spring green chandelier which was designed, blown and assembled in Seattle and then hung in the V&A with a specially made chain from the newly strengthened ceiling. For this exhibition, a new 1724kg version of the Chandelier stands in the main entrance, the largest chandelier ever built.

Seven site-specific installations have been located among the V&A’s medieval treasures. Sensuous Sea-forms, Japanese-inspired Ikebana shapes and Persian ceiling, made of a mass of kaleidoscopic forms encased in a glass roof, all display Chihuly’s exquisite skills and flamboyant style.

Outside, in the Pirelli Garden, stands the piÃ¨ce de rÃ©sistance, the 8m-high yellow and red Tower of Light, erected over the fountain. Further installations, ruby red seals and a forest of lily and purple stick-like sculptures, create a mesmerising landscape which will intoxicate the viewer.

Chihuly at the V&A is at the Victoria & Albert Museum, Cromwell Road, London SW7, from 21 June until 21 October