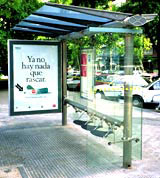 Spanish street furniture manufacturer Cemusa commissioned the industrial design team at Nicholas Grimshaw & Partners to design a range of street furniture. The range included bus shelters and stops, information points, recycling centres, public toilets and news kiosks, which could be used in various combinations to achieve flexibility and continuity throughout.

‘It’s based on a product that we designed for Madrid about three years ago,’ explains industrial designer Eoin Billings. ‘But is a new and exciting system of street furniture that is capable of adopting different identities depending on the region or local authority in which it is situated.’ Genoa could not have the same as Madrid, not only because of the cultural differences in Spain, but also because of geoclimate ones. ‘Genoa is extremely windy in the winter, and it’s on many different levels, on terraces, with very narrow streets which we had to accommodate,’ says Billings. ‘So Genoa has its own solid roof construction as opposed to glass. It has a solid timber bench instead of a cast aluminium bench. The system is essentially the same but visually it looks quite different.’

On the technology front, the design is an ‘open’ system with the possibility for mounting monitors and speakers anywhere on the structure. ‘Built-in technology can often become redundant, so an open solution allows the council to remove and replace without destroying the integrity of the piece,’ adds Billings.