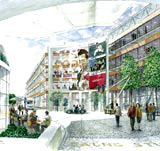 Ealing Studios is on the hunt for a consultancy after approval from the London Borough of Ealing to develop the legendary film studio site.

An interiors group is being sought to refurbish the White House, an historic building on the site containing office space, and develop a section of it into a museum, according to an Ealing Studios spokeswoman.

“Part of the brief will be to create a heritage museum at the White House,” she says. The remainder of the building, mostly offices, will also be “looked at” as part of the design brief.

Ealing Studios is looking to appoint a consultancy in around three months’ time, she says.

Architect James Burland has designed plans for the redevelopment of the entire 1.5ha site in west London. These include the creation of new production offices and the refurbishment of the film studios, as well as the proposals for the White House.

The plans will allow Ealing Studios to expand its services to “meet the needs of contemporary content production”, according to an official statement.

The purpose of the refit is to create 24 000m2 of state-of-the-art production facilities, including sound stages, post-production suites and rehearsal rooms.

The redesign also aims to give a strong communal feel to the studios, adds the statement, with an entrance area that will incorporate a retractable roof, cafÃ©, bar, screening room and a crÃ¨che.

Gorham was the Poirot of the graphics world