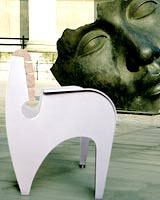 Look out of your window. The urban streetscape is in a state of confusion. It’s a visual and physical assault course walking down most town or city streets, as gold-crested black bins battle with faux Victorian streetlights in a forest of poles erected for the simplest and smallest of signage. Urban design is key in addressing this situation and a vital component in regeneration that transforms neglected environments into accessible and safe areas, bringing social cohesion and cultural exchange.

Since the Government’s Urban Task Force placed urban design high on its agenda, numerous regional partnerships and organisations have emerged to deliver this agenda. One of them, English Partnerships, describes itself as the national force for regeneration and development, working alongside Regional Development Agencies, local authorities and private sector partners. Its Urban Design Compendium launched last year, in collaboration with the Urban Design Alliance and The Housing Corporation, promotes best practice and urges a move away from “heritage range” reliance towards a more contemporary approach. It finds that all too often pedestrians are sidelined by a panoply of street furniture that is “engineering-led and car-oriented.”

As chair of the Government’s Urban Task Force and director of the more concentrated Architecture and Urbanism Unit, architect Lord Richard Rogers wants to ensure that “good design becomes integral to a city’s development”. The aim is to introduce initiatives ensuring high-quality designs for street furniture and Lord Rogers is hopeful that the Unit “can show what can be achieved, from the metropolitan scale to the neighbourhood”.

In tandem, the Design for a Greater London campaign, co-ordinated by Royal Institute of British Architects London Region, lobbies the Greater London Authority in its urban design policies and its summary report. It proposes an international design competition for a complete range of street furniture that can be applied and adapted across the board.

With so much focused attention, London’s streetscape will be radically affected over the next decade, with many schemes already underway in advance of the London Plan. On the South Bank (DW 20 October 2000), Rick Mather Architects is designing a masterplan which, according to project architect Peter Culley, will “co-ordinate an approach which takes in the needs of everyone under the title access for all”. And once the landscape architect has been appointed in July, the scope for street furniture design will be clear.

Borough Market’s regeneration by scheme architect and designer Greig & Stephenson (DW 23 March) requires a bespoke response, as director Ken Greig explains. “Some days the market needs spaces to be empty while, towards the end of the week, we expect there will be more demand for that space,” he says. As such, one of the solutions he is working on is seating that converts into market stalls.

But it’s not only London that is gearing up to refresh its urban landscape. Furniture manufacturer Wales and Wales has designed a range of street furniture to be implemented in Glasgow and Bath this summer. Luke Hughes & Company has been in charge of the manufacturing and project managing for both commissions. The range for Glasgow Green – a series of bespoke benches and bins – will be implemented in the park surrounding the housing development and rolled out in three phases from July. While the Glasgow Green range has a regeneration purpose, the Bath streetscape refurbishment project had to take into account heritage-sensitive issues. “Bath City Council wanted to improve its traffic flow and pedestrianised areas,” says Colin Watson, managing director at Luke Hughes. The result is a complete suite of furniture, from street bollards, cycle stands, benches, wastebins and flower poles, which will be supplied in August and implemented on Milsom and Green streets.

Meanwhile, Bristol City Council is in phase two of its Legible City scheme, initiated in 1999 (DW 17 September 1999) to bind together the areas of Harbourside, Broadmead and Temple Quay. The main impetus was to give the city a distinct visual identity and make it legible as an area with co-ordinated signage, visitor welcome panels, city and area maps, telephone kiosks and information booths which could guide people to the city centre’s attractions.

PSD Associates, as the industrial design consultancy on the project, created fingerpost directional signs and free-standing stainless steel information points with light beacons for after-dark navigation. The component-based system means the signs can be updated in response to future developments in the city.

“Legibility is a term that was coined by an urban planner back in the 1960s,” explains PSD Associates product and environment associate Stephen Green. “But legibility is an idea that goes beyond just putting in a wayfinding or signage system. It can be a component of a much broader agenda that ties street furniture into a broader city grounding.”

Whatever the route, the task for the designer is the same, to provoke a modern response from borough or town councils – many of which have historically been resistant to urban design – and to provide some sense of co-ordination despite the multiple players involved.

“At the moment, councils have only got two options,” explains Pearson Lloyd designer Tom Lloyd. He mentions the example of street lighting. “They either buy a Victorian column pastiche or a £300 industrial galvanised post that could easily be used along the M1. There’s nothing that is modern, culturally sophisticated and expressive that can be specified, and is also a mass-produced object,” he says.

Yet all this is about to change. The Pearson Lloyd-designed street lighting scheme, part of the City of Westminster 1999 international street furniture competition contract (DW 1 September 2000), will be installed in three pilot sites by spring 2002. Once in production by Artemide’s subsidiary DZLicht in Germany, it should be available to other city council clients both in Britain and abroad.

JCDecaux’s line of 4500 street furniture pieces for the Italian city of Turin has designs by Lord Foster, Philippe Starck and Renzo Piano awaiting approval by the city, that need to work alongside its historic monuments.

Meanwhile, Adshel will supply Singapore with a new range of street furniture by local designers. Adshel international communications director John Craven describes the range as “the biggest street furniture contract in the world”. It responds to a city where public transport is paramount, and will feature around 3200 bus shelters, some of which will be 38m long.

A change in attitude by council clients could be brought on by the fervour surrounding e-commerce which now features heavily in street furniture with Adshel’s I-plus Internet kiosks increasing to 500 nationwide by the end of the year. Industrial designer Eoin Billings, of the product design division of Nicholas Grimshaw & Partners, says, “The reality of building something electronic in the street with nobody maintaining it, in case of screen failure, is very tough.” Ultimately, he says, “If I was a councillor I would look long and hard at what I’m being offered on my street and be a lot more demanding because it makes a huge difference to people’s lives in general, just the feeling, never mind the integration of technology.”