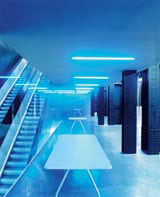 Sea Design has created a brand identity and book for furniture designer Beyon, to launch its own-brand furniture range of the same name at the end of March.

The abstract marque forms the letter ‘b’ and is based around an office work station. It is designed to reflect the nature of Beyon’s ‘simple and functional’ office furniture and will be embossed on all the furniture pieces, says product designer Steve Philips.

‘We worked in the Tate for two nights, as the light was particularly good at 4am,’ says Sea director Bryan Edmondson.

Beyon is hoping its revamped identity will help it target designers and architects more effectively, as well as retain its clients in the service industry, says Edmondson. It currently supplies companies primarily in the city such as banks and law firms.

‘[Beyon] had to change the way it is perceived to attract a more creative target market,’ Edmondson comments.

Sea won the work last year without a pitch. It was approached by Beyon on the strength of previous work with another client.

Beyon, previously called Richmond Solutions, has sold other manufacturers’ furniture collections in the past, but decided to move into design and manufacture itself, says Philips.