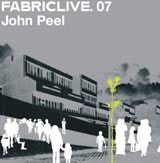 London-based Love has created cover artwork for Fabric Records’ latest DJ mix CD, which is released on 2 December. FabricLive 07 John Peel represents the veteran champion of alternative music’s first-ever compilation album. The design is based around ‘the theme of nature seen amid an urban landscape’, says Love designer Juan Cortes. A singular tree in a vivid, fluorescent green is set against the backdrop of Brutalist housing, contrasted with silhouetted figures. Love designer Ryan Belmont and art director Jon Cooke also worked on the project. Cortes adds, ‘Wildlife in nature was the [previous] look of Friday nights at Fabric Live, but where the design of that series was more involved and photographic, this current approach is visually a lot simpler.’