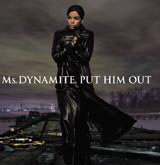 The Reptile House has worked with US-based French photographer Vincent Soyez on the sleeve design for the latest single taken from Ms Dynamite’s Mercury Prize-winning album A Little Deeper. Shot in a run-down boatyard on New York’s Staten Island, the image communicates Ms Dynamite’s standing as an urban artist with a serious lyrical content, says Matt Hughes, a designer at The Reptile House. ‘It’s a backdrop of urban decay, but beautiful at the same time. We didn’t want a bright, poppy style’, he explains. The single Put Him Out is released by Polydor on 2 December. It represents Soyez’s first UK work. He is probably best known for his shots in US hip-hop magazine Source.

Elmwood creative duo are ones who deserve credit