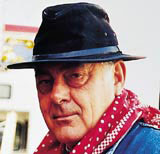 It was one of our rare sultry summer evenings. I walked the length of a pleasant mews, decorated with neat window boxes and cosseted from the hubbub of London’s Notting Hill. I was on my way to meet Alan Fletcher, a hero that I have resisted writing about until now. Could I add anything that hadn’t been covered already?

I could hear distant notes of a piano filtering out into the night air. It was coming from a door at the end of the mews, set slightly ajar. I rang the bell. A gruff voice from inside told me to enter. As I passed over the threshold I was aware of a gentle tinkling sound from above. Looking back I noticed an upturned pink feather duster attached to the top of the door. Its tips had just caressed a hanging cluster of small bells. Alan Fletcher sits perfectly centred behind one of his generous worktables. Smiling, I point to the pink duster. ‘My burglar alarm,’ he says with characteristic wit.

Fletcher wears a crisp white button-down shirt, chinos and a fly-fishing waistcoat. As he reaches to pour me a glass of wine, I notice his bright red watch strap. His face has a lived-in feel and puts me in mind of the playwright Arthur Miller. His voice is foggy, with a slightly weary delivery that some have misconstrued as detached disinterest. But for anyone who knows Fletcher, this couldn’t be further from the truth.

He is Britain’s most distinguished and applauded graphic designer. For nearly 50 years he has pursued a career that he refers to as a vocation. In that time he not only has given birth to an astonishing body of work, but was also instrumental in creating the world’s most respected design phenomenon, Pentagram. His working life has been picked over more times than he cares to remember and his two books, Beware Wet Paint and The Art of Looking Sideways have shed much light on his approach to the art of graphic design and of living.

As we started our conversation, I scanned the pinboard wall behind Fletcher. On it was an array of proofs, work in progress and some kind of planning chart. Held by two large bulldog clips was a cluster of printed flotsam and jetsam. e e These ephemeral outcasts will no doubt find their way into one of his collage pieces.

I also noticed a menagerie of animals made from loo rolls, card, cork and string. I recalled seeing them at last year’s Royal Academy Summer Exhibition, where they had been selected for inclusion much to the surprise of Fletcher. I was intrigued as to how they had come about, as Fletcher is not known for 3D work.

He explained that while on holiday in Crete with his wife Paola, daughter Raffaella and his young grandson Tobias, he was given the task of amusing the youngster while the ladies went on a shopping trip. Fletcher, who admitted he is not particularly good in these situations, sat looking at his grandson. The boy clearly had a lot of energy to burn up. Fletcher set his mind to work and instructed Tobias to rummage through the waste bin, cupboards and draws to find any old boxes, corks, bottle tops and string, because grandad was going to make him a zoo.

Half an hour later the first few animals were born. Working rapidly with glue and scissors, Fletcher found himself engrossed in this process, so much so that he kept steering his young charge’s sticky hands away from what was now becoming Fletcher’s own array of animals. Feeling a little guilty, he had an idea. ‘OK Tobias,’ he said, ‘I want you to think about this very carefully. You have to give names and sounds to all these animals’. This seemed to do the trick and during the course of the day an impressive collection of coloured creatures came to life. Tobias never actually got to keep them because Fletcher liked them so much.

I can understand this. Many artists that I know hate parting with their work. And with Fletcher, what started out as an innocent distraction to pacify a small child, became something far more important. The rapidity in making these funny creatures appeared to be pure, intuitive creativity. Admittedly, intuition fuelled by 50 years of practical knowledge. But nevertheless, for Fletcher, something special was happening and he enjoyed the moment. And here the animals now sit, in his pristine white and highly organised studio.

We were interrupted by the sound of a large door sliding open. It was Paola inviting us through to dinner. We moved from the studio into a cavernous series of rooms that constitute the Fletchers’ house. The sense of order so evident in the studio continues here, but functionality gives way to elegance and comfort. The interiors betray a lifetime of collecting. There are classic pieces of 20th century furniture that have seen continuous use and have achieved that gentle patina of age. Rugs, paintings and acres of books line the walls. All is lit in a low, intimate way to make you feel relaxed and at home. Sitting in the drive outside the house was a white Mini Moke and for a brief moment I half expected Patrick McGoohan (star of 1960s cult TV series The Prisoner) to join us for supper. But no, this was Fletcher’s car. These days he has opted for a more energetic mode of transport – he walks. But with Fletcher, even this simple activity has been turned into a creative opportunity. Armed with a small penknife – not to fend off muggers – he scans the gutters and shop doorways for tasty graphic morsels to add to his burgeoning collection.

I was curious to know what it was like when the trio of 30-somethings, Fletcher/Forbes/Gill opened their doors for the first time in 1962. While Fletcher had been working in the US for Fortune magazine, he made a conscious effort to meet as many designers who he admired as possible. Many of these meetings initiated lifelong friendships. One person he failed to pin down was Bob Gill – a young ‘hot’ designer.

So it was with some surprise that on Fletcher’s return to London he had a call from Gill, who had also just arrived in London where he was contemplating taking a job at an ad agency. They met and Fletcher introduced him to Colin Forbes, with whom Fletcher already had a loose working relationship. The die was cast. Gill amazingly persuaded the ad agency to bankroll the purchase of a small house in a mews just off Baker Street. A year passed while the property was being renovated to accommodate its new incarnation as the first home of what was to become a devastating force in British graphics. On April Fools Day 1962, the Fletcher/Forbes/Gill doors were opened. It was just the three of them, plus a receptionist and her dog. They filled their days with work from Time/Life, Pirelli and Penguin Books. With the latter client they’d argue over which of them was to design a cover, for a handsome fee of £30.

One day Fletcher recalled coming back from a lunch to discover their receptionist painting her fingernails. Perturbed by this lack of conscientiousness, there were huddled discussions and talks of firing, but Fletcher had a better idea. He told her that they were going to promote her and that she was now going to be the receptionist and book-keeper. It worked. The nail varnish never reappeared and she remained with the company, which by then had become Pentagram, for 15 years.

In 1967 Gill left. As a hot headed and opinionated character he was always destined to work under his own remit. And so ended a fascinating mix of graphic ingredients that made that early period of British design so special and so enduring.

At the many interviews I have carried out during this series, I have been surprised and flattered by the generosity of my hosts. On this occasion no one had prepared me for the culinary talents of Paola. For part of the evening I found myself talking serious kitchen utensils and exchanging recipes with her, while enjoying every scrap of what was put in front of me.

So what is Fletcher up to these days, post the publication last year of his 533-page opus? Quite a lot actually. This November sees the opening of his first gallery-based, one-man exhibition, Thoughts On a Wall, which constitutes his non-commissioned and highly personal work. I think all will be astonished at the amount on offer – it will all be for sale. I asked him why he has made the decision to sell all of this personal work. ‘I’ve run out of space,’ says Fletcher drily, ‘And anyway, nobody may be interested in the stuff’. I think not somehow.

The plan on his studio pinboard turned out to be the hanging order for his exhibition, which he has spent a lot of time organising. He also spends an increasing amount of time in Switzerland where he has been engaged by Novartis, a Swiss-based conglomerate of pharmaceuticals companies that is redeveloping the old industrial area in Basel into a new pedestrianised campus. This will comprise a mix of libraries, research and resource centres that are all related to the pharmaceuticals world, along with retail outlets. This ambitious project will take 30 years to complete – making Fletcher 101 by then. His task is threefold. He sits on the architectural selection committee, is in charge of the identity and graphics and is responsible for the signage programme and street naming. On this latter aspect he has come up with the novel idea of naming the 40 streets after famous scientists. These will be carved into the granite kerbstones so that the pedestrians can easily see them.

Phaidon, the art publisher, is still a regular client of Fletcher’s, where he acts as consultant art director, overseeing all of the creative work and often undertaking projects himself. He still finds time to travel, which both informs and fuels his passion for design. For such an organised man, his own career path has been spontaneous and ad hoc. When he left Pentagram, ‘things just happened. It’s always been like that’. But the only conscious thing he did do was to throw away his alarm clock. Finally, I ask him if there was anything he was still burning to do. He pondered this for some time. ‘Yes’, he says, ‘but I’m not telling you’.

On that note I left him. Passing once again though the tickling door and back out into the real world, I left with the image in my mind of Fletcher on hands and knees in the gutter, surreptitiously cutting out a choice piece of cardboard to take back to his creative lair.