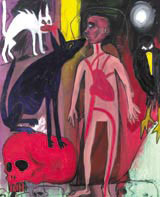 It’s a neat little trick of the Institute of Contemporary Arts to stage an exhibition of the illustrations, album covers and paintings by erstwhile Blur guitarist Graham Coxon. First class Brit Pop connections aside, Coxon also boasts authentic Brit Art heritage (he studied at Goldsmiths College alongside the likes of Sam Taylor-Wood) and a name and face that are less well known than those of his former Blur pals, Damon Albarn or Alex James. This latter fact lends him an air of mystery, and gives Brit Spotters extra Brownie points for knowing – and even owning – his work.

Which is, in essence, what this exhibition is all about. At two days long, it’s more like an extended Private View of Coxon’s pieces, which are, of course, for sale. Ten limited edition prints will be available from 29 October. Giving Coxon a weekend’s worth of prime ICA space, and his show the grandiose title ‘retrospective’, lend the proceedings extra gravitas.

But the show is about his work, which is diverse, colourful and accessible. His album and single sleeves, which visitors may well know, are scratchy and cartoon-like, rendered in pencil (Freakin’ Out) and with childlike, coloured in, oversize typewriter fonts. Happiness in Magazines, his fifth album and biggest seller to date, is the most starkly graphic of them all. All Over Me, created in Biro and acrylic on wood, features an Egon Schiele-like illustration of a seated nude woman, in which the wood grain patterns her skin. It’s simple, but stylish. And his other nudes painted on canvas, some of which have been created specifically for the show, are abstract and, at points, Picasso-esque.

The album sleeves won’t blow any graphic designer away – get yourself down to the Barbican’s Communicate show while you can for that – and the art, attractive as it is, doesn’t have a huge amount to say. It’s impossible to believe the show would take place at all if Coxon were an unknown Goldsmiths alumnus. But for an immensely talented guitarist, Coxon’s not a bad artist. After all, how many hugely successful graphic designers have hidden talents as musicians?

The Graham Coxon exhibition runs from Friday 30 to Saturday 31 October at the ICA, The Mall, London SW1

Culture is much more interesting than objects