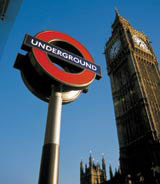 Trams themselves create a fair bit of clutter. In most historic European cities, tramline cables are suspended between buildings. ‘In the UK, everyone is the ruler of his little palace and no-one wants electricity cables hung from their building,’ says architect Cezary Bednarski, who has been appointed by CRT to look at regeneration along its route. The solution is to add to the street furniture by introducing support pylons for cables and signage. ‘This is a syndrome with UK tram transport,’ he adds.

However, trams do have a certain advantage over other forms of public transport. ‘The beauty of the tram is that it announces itself with rails and cables, so you wouldn’t rely so much on signage,’ says Bednarski.

So much for way-finding. The other big issue for signage is its role to impart information and participate in an area’s security. And this is where modern technology can come into play. Nowadays, speaker systems and surveillance technology can be incorporated into signage systems, or they can carry dormant elements, such as emergency signage, which is illuminated when needed.

Such hi-tech solutions are already on show in Japan. Priestman Goode senior designer Peter Mitchelson, for example, points to a new system installed on the Narita Express in Japan. A dynamic LED sign in the tunnel scrolls the name of the station so that it is synchronised with the train as it slows down to a stop alongside the platform.

Meanwhile, in July, London Rail and train operator Southern announced a £2.6m investment in station security, which will make quite an impact on signage. The aim is to improve passenger safety and security at 29 stations. This will include the introduction of help points with induction loops, which come to the aid of people who use a hearing aid or loop listener by cutting out background noise.

Trains are an on-going concern of the Information Design Unit, part of Enterprise IG. This summer, the consultancy completed a report for the London Transport Users committee on railway station signage. It has discovered that badly designed or laid out station signage is actually impairing customer travel. The IDU’s particular gripe is name signage, which fails to appear clearly or often enough along platforms. The London Transport Users committee is currently touting the findings around the rail operators. So there is hope for passengers navigating complicated railway signage, and even more work in the pipeline for information designers.