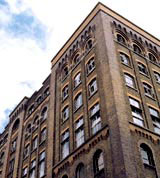 The £30m Guinness Storehouse in Dublin was unveiled for the first time last week. The Imagination project, due to open at the St James’s Gate brewery at the end of November, will convert the listed, steel-framed building into a visitor attraction.

Situated within a six-storey fermentation building, built in 1904, the Guinness Storehouse lies over 16 000m2 of floorspace and is designed to appeal to both local and international visitors.

Its centrepiece is a giant pint glass-shaped atrium, topped with a 360 degree public bar called Gravity, which will be the highest in the city. Two more bars, a restaurant, gallery space, and conference facilities will enable Storehouse to be used for a range of public and private events, while archive and training sections will make it a working Guinness building.

“When we set out on the Storehouse concept we were convinced that what was needed was not a glorified shop or a corporate cathedral. Guinness does not have an image problem or a retail need,” says Imagination marketing and strategic planning director Ralph Ardill.

“The Guinness Storehouse… interprets one of the world’s best known brands in a totally new and unexpected way,” he adds.

Visitors will be able to learn about the brewing process and the huge impact the business has made in Dublin and overseas. The project was won nearly four years ago through an Irish architectural competition by the consortium of Imagination and architect Robinson Keefe, and Devane.