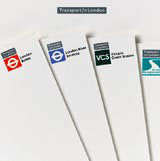 The Identica partnership has created an interim corporate identity for Transport for London. It will be operational until a complete review of future branding requirements is completed.

The identity, featuring the New Johnston typeface used by London Transport since 1980, aims to provide continuity between past and future identities and to reflect the needs of users. It is intended to provide a smooth transition for further development.

Transport for London is an umbrella brand responsible for implementing the London Mayor’s transport strategy and managing the transport systems for which he is accountable. These include London’s buses, street management, river services and Docklands Light Railway.

The logotype takes the form of easily understood wording. In some instances the original roundel used by London Underground has been incorporated.

Due to ongoing discussions regarding privatisation, the underground has not been included in the designs. But under present plans it will fall under the remit of Transport for London by 2001.