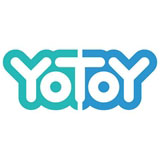 Clarks is set to launch an innovative range of children’s shoes called Yotoy, which are being designed with toys hidden in the soles.

The shoes have been designed by Clarks’ in-house design team based near Bath and the project has been led by Alice Mounter, kids marketing manager at Clarks. Bristol-based Taxi Studio was appointed to create an over-arching brand identity for the forthcoming range, which will launch as part of next year’s autumn and winter collection. Taxi Studio has also created the visual identities for the toys.

Each shoe contains a toy that has been split in two and which is placed in the shoe’s heel. When the separate parts are joined together, they form the complete toy. The boys toy is a race car called Zoomz, which contains a working motor. The girls toy, Daisy Change, is a doll and features interchangeable clothing and hairstyles.

The Yotoy brand identity is palindromic and is designed to represent the two different halves of the toys. The brand identity has been created to be non-gender-specific and is reminiscent of the Japanese-style toys that became popular in UK playgrounds, says Spencer Buck, creative director at Taxi Studio. The branding will appear on the toys themselves, point-of-sale materials and shoe box packaging. ‘We hope the range captures the imagination of kids,’ says Mounter.

The roll-out of Yotoy builds on the success of last year’s experimental launch, Starship Explorer, which trialled this innovative toy concept with a boys shoe that contained two halves of a space rocket. The rocket featured a headlamp activated by pressing a button.

Taxi Studio was appointed to this project in June. The group has worked with Clarks for about seven years.