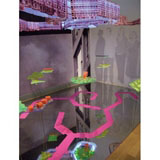 The tenth Venice Architectural Biennale takes the theme Cities, Architecture and Society, and who better than LSE centennial professor in architecture and urbanism, Richard Burdett, to direct this year’s proceedings. The biggest exhibition is at the Arsenale, where Burdett has dissected the facts and figures of 16 large cities. The message is that our fast-growing world population is increasingly inhabiting large cities that need to respond to the pressures of high-density living, public transport, sustainable issues and open spaces. In the Biennale Gardens, 30 pavilions present urban development projects from different countries. The British pavilion focuses on Sheffield and showcases the many layers that make up its vibrancy and individuality. Sheffield art-rock band The Long Blondes even played a set on the stairs of the pavilion with true British gusto! The Royal College of Art’s Babylon:don contribution in the Italian pavilion includes films, models and drawings that let you dream of a London that has verve, humour and intensity. And a scaffolding structure in the French pavilion is apparently taken over by ‘squatters’ – people sleeping, eating, drinking, resting and bathing. This is the exhibit, open to visitors to relax, indulge in a drink or two and, of course, become part of the show.Venice Architectural Biennale runs until 19 November