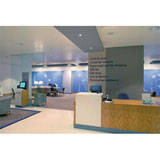 We’ve all been there. A quick lunch-hour trip to the shops turns to frustration as the search for sunscreen, a pair of jeans or a new album ends up in a long slog across several floors and around poorly marked departments. Then, with time running out, you give up to discover you can’t find the exit either. Signage and navigation in retail environments are rarely straightforward and often seem less dedicated to wayfinding and more to ensuring that every square inch of the store is well trodden by frustrated customers.

Speak to signage specialists and there are some damning verdicts. CDT Design has worked on public wayfinding projects including the Scottish Parliament in Edinburgh, London’s South Bank and the National Theatre. According to CDT’s managing creative partner Neil Walker, in-store navigation is improving but still has fundamental flaws.

‘Usually, retail signage is not in the most obvious place, it’s tucked away from the primary entrance, up too high or in ludicrous out-of-the-way places, and shoppers are left to their own devices,’ he says. ‘In public spaces like airports, retail environments are almost designed to get customers lost, to get them spending more time and more money.’ 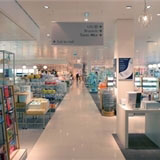 Retailers clearly have an interest in extending our time in-store. John Lewis point-of-sale marketing manager Simon Sheppard acknowledges this when he says ‘signage needs to stand out without being the first thing customers notice’. At John Lewis’ new Oxford Street store in London there will be three levels of signage, all designed in-house: a primary block at the entrance directing shoppers to the right floor; overhead hanging signage on each floor highlighting departments; and brand blocks to help with navigation.

‘Our aim is to be user-friendly,’ says Sheppard. ‘We guide customers the quickest way, not through a million tortuous locations. But in terms of scale and impact, signage needs to fit in with our policy on the shopfloor – that product is still the first thing customers focus on.’

But as consumers become increasingly time poor and brand savvy, it may be that retailers need to afford signage greater priority. Household director Michelle du-Prât has just completed interiors for Currys. digital, following the decision to rebrand the former Dixons shops. ‘The thinking today is that it’s important to get people to where they need to go quickly,’ she says. ‘Getting customers to the product they’re looking for quickly gives them more time to browse and perhaps buy something else. If people can’t find what they’re looking for, they’ll just leave.’

Walker agrees. Along with public realm signage, CDT has worked with WH Smith and Our Price. In the retail environment, says Walker, the group ‘created areas people could identify and get to very quickly. Retailers found that sales actually went up. ‘Lots of people are in a hurry and being in-store and not being able to find things is very annoying if you are short of time,’ he says. 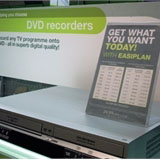 Fitch executive creative director Tim Greenhalgh takes a different point of view. He believes the trend for signage within retail spaces is that it’s becoming ‘more subliminal and intuitive’. At Tesco’s new Kensington store, the group used photography, alongside the usual aisle-based signage, to lead people around the shop. ‘People can [understand] images more quickly,’ says Greenhalgh, ‘and it’s a novel way of balancing function and emotion.’

Brand messages are increasingly doubling as signage. In the new Vodafone store, signage uses images and words that tie in to the brand’s marketing campaigns. ‘It’s more about the brand than about navigation,’ says Greenhalgh.

This method assumes shoppers are familiar with the brand and its language and is an approach more retailers are using. In Currys. digital stores, ‘point-of-sale material highlights new products to the customer and can act as directional signage’, says du-Prât. ‘Language and tone are important – we’re keeping it very single-minded and doing everything we can to move away from overload.’

Vivid Brand retail director Paul King concedes that ‘a total brand, signage and communications strategy’ is ideal, but says too often signage and point-of-sale material fight for space; little thought is given to a coherent approach and the result is what he calls ‘graphic diarrhoea’.

Balancing brand and product messages with the need to navigate customers around the store is a challenge, but Walker believes it is possible to make signage ‘a beautiful feature’. ‘Too many retailers see signage as a necessary evil,’ he says. ‘It’s not about millions of signs; it’s about having them in the right place and making them readable to all. Large type doesn’t have to equal ugly. Signage can be in sympathy with its environment, and still do its job.’ l

Humble 2 designs for Spiral Systems’ In Your Dreams