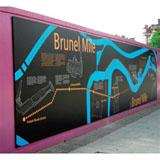 Lacock Gullam and Applied Information Group have developed a signage and interpretive graphics scheme to mark the Brunel Mile, a route through Bristol celebrating the bicentenary of the pioneering Victorian engineer Isambard Kingdom Brunel.

Plans to introduce such interpretive elements to Bristol’s signage date back to a wayfinding study in 1998, but the Brunel Mile is the first example to be installed. Its launch, last week, forms part of the ongoing Bristol Legible City programme, which Lacock Gullam and AIG are continuing to develop, focusing on 3D product design and graphic elements respectively (DW 24 February 2005).

The Brunel Mile is a newly created walking route that connects Brunel’s Temple Meads Station – purportedly the world’s first purpose-built railway terminus – to the SS Great Britain, his revolutionary steamship that is now housed in a dedicated museum located at the city’s dockyards.

Signage elements aimed at visitors and sightseers include freestanding interpretative monoliths and a ten-metre-long ‘super graphic’, which maps out the entire route and illustrates the legacy of Brunel’s work in Bristol. The monoliths offer an interpretive history of Brunel, highlighting key places and points of historical interest throughout the route.

Further interpretive and wayfinding signs and large-scale graphics will all be installed in the route throughout the autumn, according to Lacock Gullam creative director Sam Gullam. ‘The route was identified as a key pedestrian movement path in 1998 and since then has been a focus for investment by the city council. Further upgrades to the physical environment are also about to commence,’ he says.

Lacock Gullam and AIG are also completing work on welcome points at the city’s primary arrival locations, with signage due for installation at Bristol International Airport and other locations across the city next month. The welcome points will be the first of the Legible City projects to integrate the pedestrian signage system with the public transport system, according to Gullam.