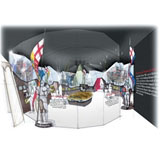 The Battle of Bosworth Visitor Centre, located in Leicestershire, is relaunching next year with a £400 000 makeover, featuring an interactive exhibition design created by Studio MB.

The Edinburgh-based group was appointed by Leicestershire County Council, which runs the visitor centre, following an extensive pitch process in May. It is tasked with creating an exhibition design that brings the bloody 1485 battle more to life.

Studio MB has designed five key characters through which to tell the story of the battle. These include a surgeon, a knight, a French mercenary’s wife, a foot soldier and a little girl from the village. The characters are introduced to visitors at the start of the exhibition in two-minute testimonials, which appear on a number of monitors.

The exhibition is divided into different zones, which are designed to guide the visitor through the complex historical happenings around the time of the battle. The various exhibit areas include The Wars of the Roses, The Road to Bosworth, Preparing for Combat, The Battle Room and The Aftermath.

Studio MB has also created a separate Bosworth Field Investigation Lab, which seeks to explain the significance of science and archaeology to history. This part of the exhibit features a white interior and blue lighting and is designed to look like a forensic lab.

The Battle Room section is the ‘highlight’ of the exhibition, according to Charlie Barr, director at Studio MB. This part of the exhibit features immersive surround sound, film and animation projections, an interactive round-map table and an audio-visual installation.

‘We didn’t want to create a book-on-the-wall type of exhibition. The characters have been designed to convey the full scope of the social, cultural and historical stories during this time,’ says Barr.

The visitor centre, which was first opened in 1977, has not been updated since 1985. The project is funded by a grant from the Heritage Lottery Fund. The centre relaunched its brand identity last year with a design created in-house.

The Battle of Bosworth is one of the three most important battles in British history. It marked the end of the long-running English civil wars, the Wars of the Roses, and was fought between the supporters of Henry Tudor and Yorkist King Richard III, the last of the Plantagenet dynasty. The victor, Henry Tudor, became King Henry VII and secured the start of the 118-year reign of the Tudor dynasty.

• Set to reopen next year, date to be confirmed

London Design Festival has to make its objectives clear