Five WPP design consultancies have ditched their names and come together under one brand called Superunion, in a bid to “create more client and project opportunities”.

Superunion is made up of Brand Union, Lambie-Nairn, The Partners, Addison and Vbat, which is based in Amsterdam, and will bring together disciplines including branding, motion graphics, packaging and digital design. The decision to merge the consultancies was first announced in September 2017.

Sabah Ashraf becomes CEO of the US market, while Coleen Cahill becomes chief client officer. The senior team is made up of 21 people, nine of which are female.

The move brings together the clients and employees of five consultancies, totalling in 750 staff spread across 23 offices in 18 countries worldwide. Clients include Diageo, Fifa, Ford and Vodafone, and the new consultancy will now take in roughly $100 million (£72 million) from clients worldwide each year.

“A more diverse range of clients and staff career development”

Interviews were not conducted to place staff in new roles, global CEO Jim Prior tells Design Week, but instead “things fell into place quite naturally” and decisions were made by WPP’s senior management team based on “experience, relationships and areas of skills”.

The union of five consultancies sees no staff redundancies, Prior says, and the consultancy is currently looking to recruit.

“Superunion means opportunities to work on a more diverse range of clients, a broader range of assignments, and also career development for our staff,” says Prior. “The client base is limited in smaller and mid-size consultancies – now, our people will be working with the largest and most exciting brands in the world from day one.”

On how the new offering will compete alongside other WPP-owned design consultancies such as Design Bridge, AKQA and Fitch, Prior says there will be “friendly competition” and opportunities to “cooperate and work together”, and the merger will give clients “choice within WPP”.

Four out of five of the former consultancy names will be ditched and replaced with Superunion as the teams stop working individually and come together as one team. Vbat will continue to operate under its existing name.

“Retaining individual names would have been inconsistent”

“Four of the five companies – The Partners, Lambie-Nairn, Vbat and Addison – have been working closely together anyway under my leadership, for the last three years,” he says. “Lambie-Nairn and The Partners’ collaboration on the ARTE rebrand last year is evidence of that success.

“We are one consultancy now, not five companies, and we’ve integrated everyone,” he adds. “A new name is a great way to signal the change we’re going through, and to retain individual names would have been inconsistent.”

The new logo features a lowercase, serif, bespoke typeface for the brand name, which aims to be “human and “approachable” says Quinton, with the “u” and “n” characters cut in half to look as if they are part of the same character.

This aims to represent the idea of unity, says Quinton, and “brings two things together in an unexpected way to create one” – symbolic of the consultancy merger itself, he adds. 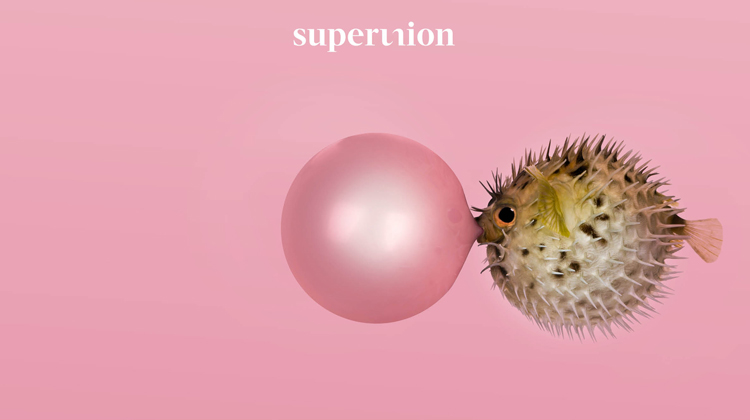 A bright colour palette has been incorporated, which features pairs of “optimistic” and “vibrant” shades used together in pairs, such as “honey and bee yellow”, “berry and bubblegum pink” and “ocean and wave blue”.

Imagery and photography also reflect the theme of pairs, says Quinton, with “two things coming together to create something hyper-real and more interesting”. This includes objects with similar shapes paired together, such as a puffer fish and a circular bubblegum bubble. The colour and imagery scheme aims to be “flexible” so it can be used across Superunion’s global markets, says Quinton.

Two additional typefaces are used across the visual identity; serif Cormorant for headings, and sans-serif National Two for body copy.

Quinton, who ran the creative side of The Partners for 25 years, says the move is a positive one for the individual consultancies.

“We will be so much better being one, consolidated group, and so much more powerful,” he says. “What clients are looking for is the best of both worlds – they want creativity and the ability to scale. They want an easy process, high quality of work and consistent roll-out. This is not an exercise in cost-cutting – it’s a process of building.”

The merger means the four UK-based consultancies will share the same office space at Brewhouse Yard, in London’s Clerkenwell, where Lambie-Nairn and Brand Union currently operate. The Partners moved into the space in December, and Addison will move there this year. Vbat will continue to work from Amsterdam.

Superunion has launched and the new visual identity will continue to roll out across marketing and print materials, merchandise, online and office interiors this month.