As part of the rebrand, Happy F&B has created a new hand-drawn logo and a graphic pattern based on Lindgren’s handwritten manuscripts. 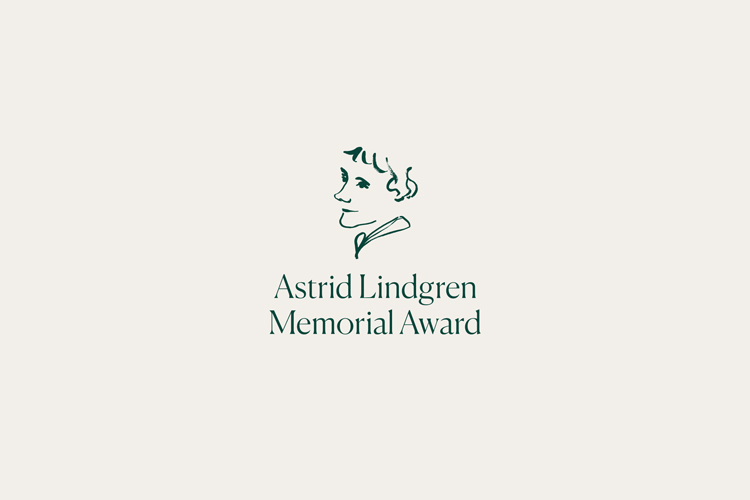 The award has established in 2002 by the Swedish government to honour Lindgren, the celebrated children’s author who is the fourth most translated children’s writer in the world.

Each year, it awards a cash prize worth over £400,000 to a children’s writer who works in Lindgren’s spirit, continuing her “imagination, bravery, respect and empathy”, according to organisers. Previous winners include Jacqueline Woodson, Meg Rosoff and Philip Pullman. 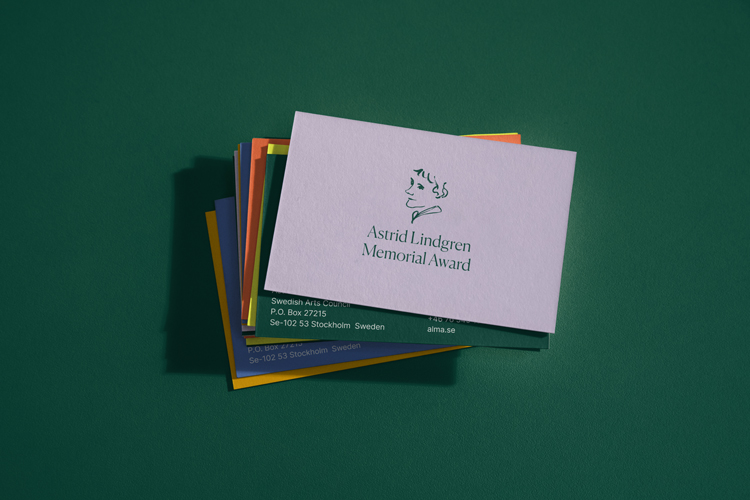 Happy F&B design directors Anna Ahnborg and Andreas Kittel say that while the work of previous laureates inspired the process, it was Lindgren who remained the primary inspiration throughout.

“Everything from the book covers and Ilon Wikland’s illustration that we grew up with to just her essence and values,” they say. 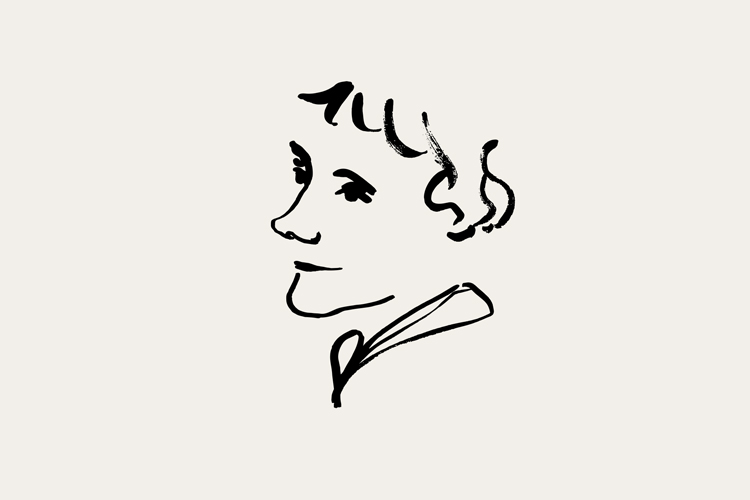 The logo is a custom-drawn portait of Lindgren, accompanied by a wordmark. The logo was developed in close collaboration with illustrator Amanda Åkerman. The aim was to create something warm and dignified, according to Ahnborg and Kittel.

“It is not unusual for big prestigious awards that honour someone’s memory or have a founder to picture that person in some way, in the logo or on a medal,” the designers say. “However, this is often done in a very traditional and rather stiff manner, and frankly, it’s usually men portrayed with a severe look on their face.” 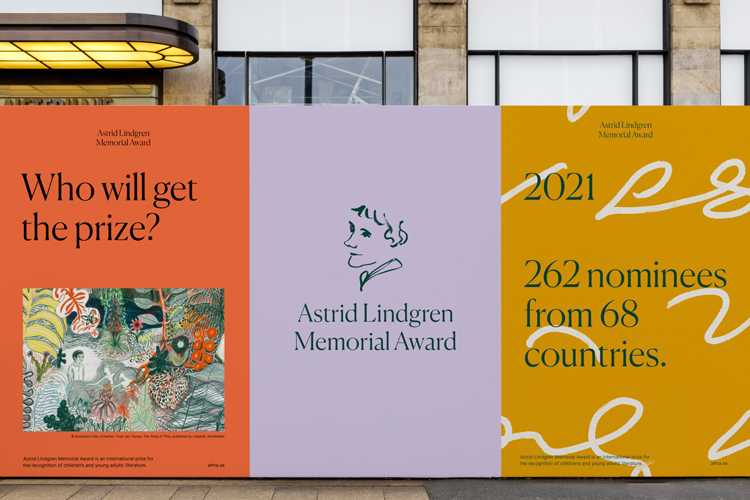 The studio’s rendering of Lindgren hopes to give her that same status but also “portray her with the wisdom, warmth, ease and authority that she possessed,” Ahnborg and Kittel say.

The varied colour palette consists of lilac, blue, orange, green, red as well as a series of more muted shades. These choices aim to create a “serious and playful expression”, the designers say, hopefully attracting both a younger and more mature audience. 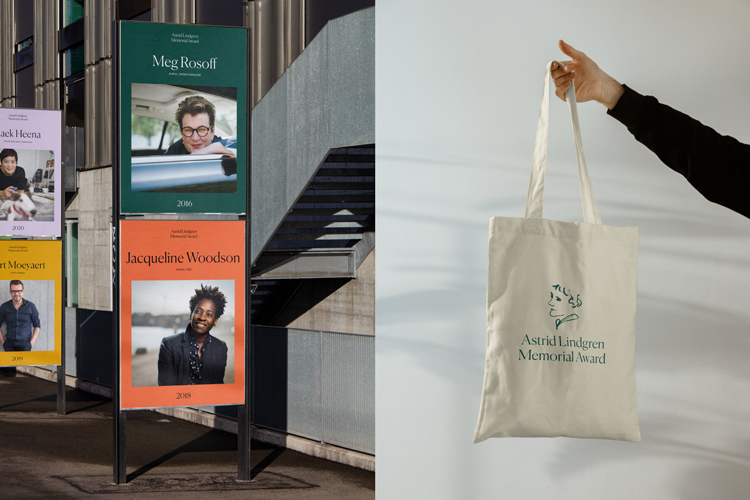 The colour palette is connected to Lindgren’s work and specifically her characters, and the designers say that they found inspiration in their own memories and feelings.

For example, the orange-red connects to Pippi Longstocking’s hair colour, while Emil of Lönneberga’s blue cap and the deep green woods in Ronia, the Robber’s Daughter have also inspired the colour choice. Others are more subtle, the design team says, such as the lilac which is connected to the early 19th century fashion that appears in the Madicken series.

A graphic pattern inspired by Lindgren’s own writing 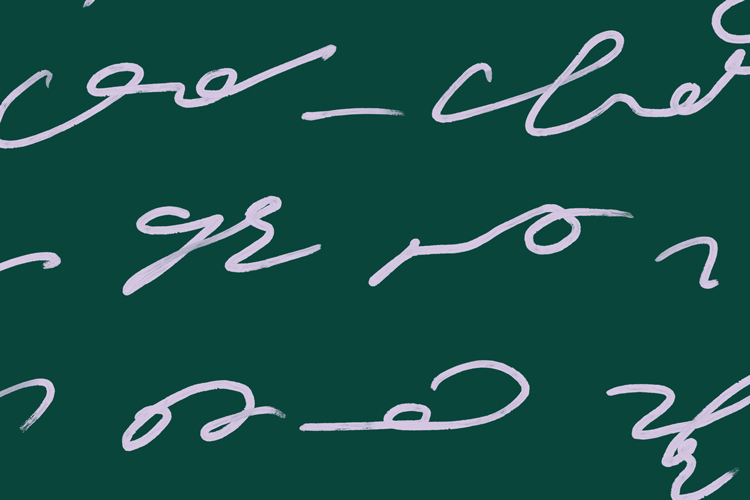 A key part of the new identity is a graphic pattern, inspired by Lindgren’s own shorthand. The concept emerged from a contemporary Swedish project called the Astrid Lindgren Code, which aims to decode these shorthand notebooks and manuscripts. “Lindgren developed her own unique shorthand style, so much of these note books’ content is still a mystery,” the designers explain.

The design team was allowed to inspect the original manuscript of The World’s Best Karlsson from 1968, housed at the Swedish Institute for Children’s Books in Stockholm. The institute is home to almost 700 of Lindgren’s shorthand notepads. 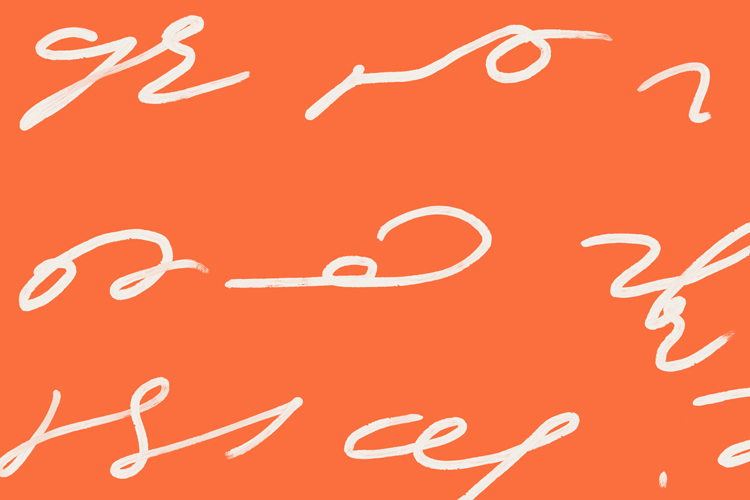 Happy F&B digitised the shorthand and created a pattern that “still has the move of her hand present”, according to Ahnborg and Kittel. “We love that it is both decorative but carries its own story about Astrid Lindgren and her legendary writing process.”

Two typefaces are in use: Canela and Inter. “For a literary prize, typography is of course of great importance,” the team says.

The pair of primary typefaces were chosen for their “well-drawn, functional” qualities that “could give a classic editorial expression without losing the modern elements and still have a lot of personality”, the designers add. 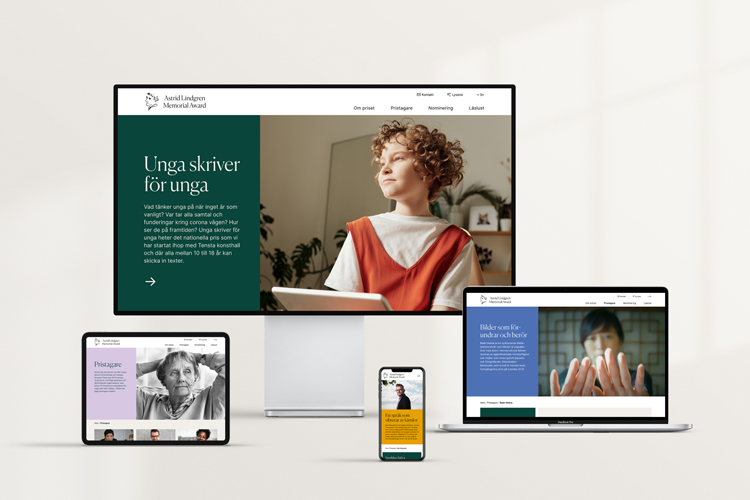