The Bank of England (BoE) has unveiled a new £50 banknote, which features the scientist and WWII codebreaker Alan Turing.

Turing was chosen as the face of the new note following a public consultation, where over 200,000 nominations were made.

BoE governor Andrew Bailey says that putting the scientist on the note celebrates his achievements and groundbreaking scientific work.

“Turing is best known for his codebreaking work at Bletchley Park, which helped end the Second World War,” Bailey adds. “However, in addition he was a leading mathematician, developmental biologist, and a pioneer in the field of computer science.” 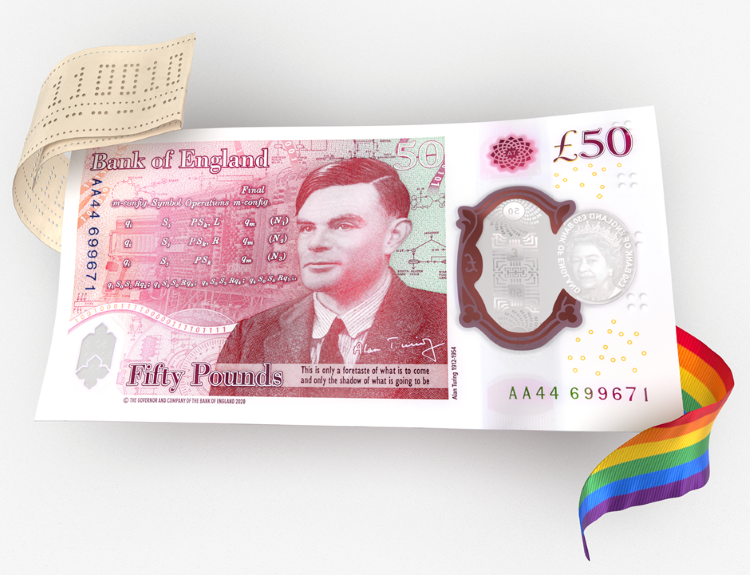 Turing was also gay and was persecuted during the 1950s for his sexuality. He eventually accepted chemical castration as his treatment as an alternative to prison. He died in 1954, as a result of cyanide poisoning.

GCHQ director Jeremy Fleming says that Turing’s appearance on the note is a “landmark moment in our history”, adding that it “confirms his status as one of the most iconic LGBT+ figures in the world”.

“Turing was embraced for his brilliance and persecuted for being gay,” Fleming adds. “His legacy is a reminder of the value of embracing all aspects of diversity, but also the work we still need to do to become truly inclusive.”

Design details of the new £50 note 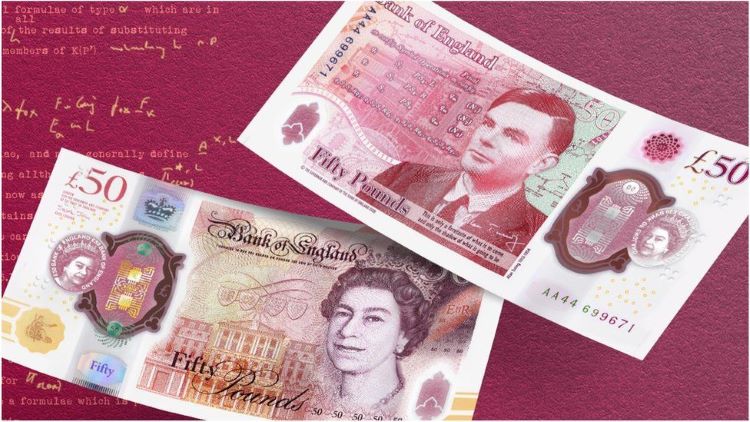 The photo used of Turing for the note was taken in 1951 by photography studio Elliott & Fry, which is now part of the National Portrait Gallery’s collection.

The portrait is accompanied by a table and mathematical formulae from Turing’s 1936 paper, ‘On Computable Numbers, with an application to the Entscheidungsproblem’. According to BoE, this paper is recognised as being foundational for computer science.

The note also features Turing’s signature and ticker tape which depicts his birth date in binary code. Part of Turing’s 1936 paper involved the concept of a machine being fed by binary ticker tape.

It also introduced the concept of a ‘Turing machine’, which laid the grounds for how computers might function, the bank adds. 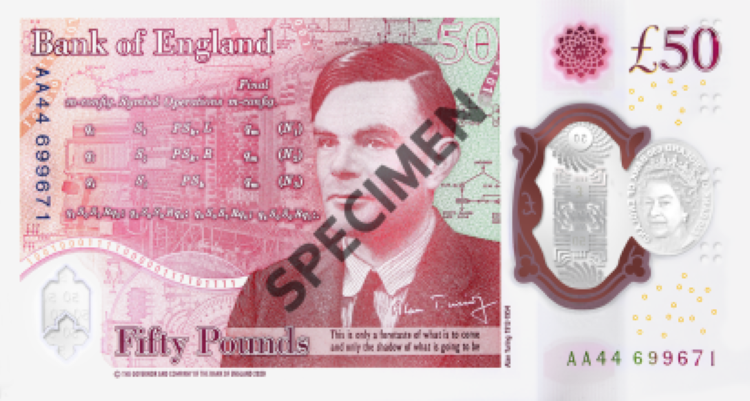 More design details reference Turing’s accomplishments. There are technical drawings for the British Bombe, the machine which was used to break Enigma messages during WWII.

A flower-shaped red foil patch on the note’s reverse is inspired by a sunflower, which links to Turing’s later studies of morphogenesis.

Meanwhile the shape of a see-through window in the bottom corner of the note is inspired by architectural forms at Bletchley Park.

The design is completed with a quotation from Turing, given to the Times in 1949: “This is only a foretaste of what is to come, and only the shadow of what is going to be.”

One of BoE’s most secure designs yet

The note will be one of the most secure designs yet, according to BoE. Like the £20 note, it has two windows and a two-colour foil which makes counterfeiting more difficult. There is also a hologram which alternates between ‘Fifty’ and ‘Pounds’ when the note is tilted.

As with BoE’s most recent notes, the £50 will be made from polymer which lasts longer than paper notes, according to the bank. It will have a tactile feature to help visually-impaired people identify its value.

The other designs in this new set are Winston Churchill on the £5, Jane Austen on the £10 and painter JMW Turner on the £20.

The new note will be issued for the first time 23 June 2021, which is also Turing’s birthday.