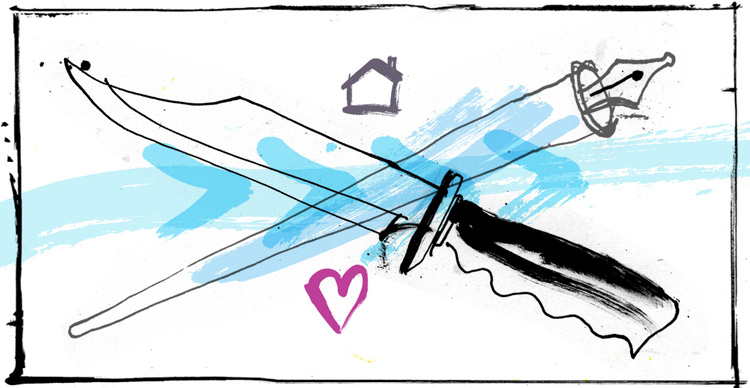 As a teenager living in my hometown of Keighley, West Yorkshire, I owned air pistols and knives. I shot cans in the woods, and skinned sticks to create make-shift bows and arrows. I got into fist-fights over trivial things, and was once dragged to my parents’ front door by a local security guard for firing a catapult at his car. I also stole an action figure from Woolworth’s, leading to me being banned from all of the now-extinct chain’s UK stores.

“Kids who I’d seen fighting would engage in football”

But I also used to take part in a football tournament run at a sports centre by the local police force for three weeks at a time every summer. Kids from all across the region would come down and form teams, or watch and support their friends.

It was a simple format, governed with a clipboard and the hard work of a few police officers who had given up their time. There was such a sense of belonging and excitement, and kids who I had seen fighting in the park were there, playing and engaged. Others went to youth clubs; fun, social places where kids could do art, play games and roam around and talk to other people their age.

When it rained and the football tournament ended, I’d draw indoors. At school, I could make people laugh and I regularly got into trouble for drawing offensive caricatures of teachers.

“One teacher turned my offensive drawings into positivity”

Then one smart teacher decided not to punish me for my exaggerated version of him. Instead, he asked me to design a poster for a talk he was giving on dyslexia. It was a simple switch from negative to positive without dissuading my natural inclination to create. That was a pivotal moment, which played a huge part in earning me a career in design and illustration.

At 15 years old, another teacher – who I had also recreated offensively – sent me to the local college’s art department for work experience. The lecturers noticed me, and subsequently offered me a place on the college’s graphic design course. Thanks to guidance and the vehicle of creativity, I learned from my mistakes and my teenage rebellion became a valuable asset. This transformation is something I also see in my close friend and electronic musician Dirty Freud, who, growing up on a North London council estate, was surrounded by those turning to drugs and crime at a time when he discovered music and writing instead.

£387 million cut from youth services in the last seven years

Luckily, despite my prior delinquencies, I had parents who cared about where I was, what I was doing and who I was with, alongside teachers thoughtful enough to inspire me to change. Many others did not.

Government funding for young people has dropped dramatically in recent years. Research from Unison shows that £387 million was cut from youth services across Great Britain between 2010 and 2016. It cannot be ignored that there was also a 14% increase in knife crime in 2016 compared to the year before, at nearly 32,500 offences, a trend which I saw reiterated in the daily newspapers on my commute home last week.

I angrily squirmed in my Tube seat, as The Evening Standard asked why this is happening. There are many reasons but it does not take a think tank to understand that young people pack a lot of excess energy and it has to go somewhere. When their needs are ignored, bad things happen.

There will always be children who have nobody there to catch them when they stumble, and what of those? Society has a moral obligation to provide support that may be lacking at home. Stabbing another human being is a heinous act; but to cry foul of a drastic increase in knife crime without addressing the root causes is just as morally bankrupt.

I had an abundance of energy and a love for mischief as a teenager, and had it not been channelled into creativity, my life could have quite easily taken a different direction. I have seen first-hand the outcomes for others who had a lust for life and talent, but no support.

If governments continue to remove spaces where young people can play, meet others with similar interests, learn from adults and form a sense of belonging and identity, then the number of these nasty incidents is only going to rise.

How to design packaging that works in-store and on-screen