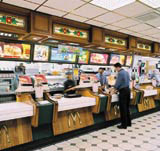 It’s all change at McDonald’s. First the fast food giant introduced red-leather booths and the low-fat Salads Plus range in its British restaurants. Now, it emerges that the Golden Arches is to roll out a home-delivery service across selected branches in India. It’s a good thing Morgan ‘Super Size Me’ Spurlock didn’t make his documentary there. If he hadn’t burned so many calories briskly approaching McDonald’s counters for the Big Macs he consumed during filming, he would have been doing a bit of rolling out, too.