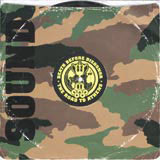 Independent graphic designer Jah Eart’ has created a limited-edition magazine to promote Puma’s Death Before Dishonor – The Road to Athens event. The reggae ‘sound clash’, held last week in Montego Bay, Jamaica, featured five DJs competing for the chance to perform at the retailer’s Olympics party in August. The magazine cover takes the form of a 10-inch dub plate, with a camouflage ‘sleeve’ made up of interlocking maps of Jamaica. ‘It’s inspired by war and conflict, though not in a negative way. [The event] is a competition, and the DJs are the best soldiers at what they do,’ explains Jah Eart’. Puma jointly hosted the event with reggae label VP Records and promoters Irish and Chin as part of its sponsorship of the Jamaican track-and-field team.