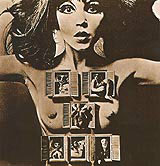 Forty years of creative excellence from British Design & Art Direction will be celebrated at the Victoria & Albert Museum in an exhibition designed by Din Associates.

The show is the first major retrospective of the D&AD Awards since their inception in 1963. Billed as a ‘must-see’ exhibition of the best of design and advertising disciplines it will include classics ranging from Alan Aldridge’s Chelsea Girls poster for Andy Warhol’s experimental film (pictured) to Jonathan Ive’s iMac for Apple Computers. Among the groups featured are Conran Design Group, Pentagram and Wolff Olins.

The exhibition runs from 7 November until 2 February 2003.

A 512-page, accompanying book, designed by Johnson Banks, will be published by Phaidon Press.

Michael Johnson has contributed the foreword and cover story for the book. Introductory texts have been written by Alan Fletcher (The 60s), John Webster (The 70s), Peter York (The 80s), Richard Seymour (The 90s) and Jeremy Bullmore (The Future).

The publication is edited and written by Jeremy Myerson and Graham Vickers.