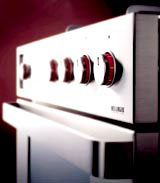 It’s been a while, roughly three years, since we all gasped at the sheer beauty of the iMac. Translucent at first, then later becoming fully transparent in its graphite avatar, this was an instant design icon that had millions buying a computer perhaps as much for its looks as its performance. At one fell swoop, Apple Computer succeeded in bringing to market a product that shifted notions of what a computer should look like, restoring its own flagging fortunes at the same time. Suddenly, the somewhat closed world of the cyber-geek opened up to anyone with an interest in style and high gloss plastic candy-coloured finishes.

The iMac’s influence was felt well beyond the hi-tech arena. As Silvia Katz, design consultant and curator of a forthcoming exhibition on plastics at London’s Geffrye Museum, points out: “It gave new life to plastic and restored integrity to it as a material.” Ruth Hewett, north European design manager at Formica, agrees. “Transparency and translucency may have been around for a while, but I think they’re going to continue. Plastic is no longer seen as a cheap alternative, products have been engineered to suit the medium,” she says.

But Sam Hecht, London head of industrial design at Ideo Europe, urges caution with regard to the iMac’s legacy: “In giving the impression of dematerialisation (the deconstruction of an object so its components can ‘do the talking’), the iMac was quite an old idea. There is no reason for its form. It’s a simple design that appealed to the masses.” He points to an Ideo Europe design due for release in April. “We designed a translucent TV remote control for Netgen that is reddish in colour. This is because it’s made completely of plastic, with the same frequency as the infra-red windows you normally see on such devices. You see the components within, but it’s born from function and economy of means. This contrasts with the iMac, which does nothing other than celebrate its innards,” he explains.

So with transparency mainstream, which surfaces and finishes are going to be next to capture the public’s attention? Geoff Hollington, partner at Hollington Design, is doubtful about the possibility of another “big thing” on the scale of the iMac in the near future. “Transparency has gone right down the food chain: there’s still mileage left in it, although it moves in waves through product categories,” he says. “Compared to where we were a few years ago, things have changed a lot. Obviously, there’s a technological trajectory: the range of the possible has been extended. But there’s also a cultural trajectory. Manufacturers are prepared to do more, to take risks. They have woken up to the fact that consumers are ‘up for it’.”

At Philips’ research centre in Eindhoven, senior trend analyst Brechje Vissers picks up the theme: “The market is really cluttered, but what consumers are looking for are options. Most products do what they are intended to do in terms of function, so it becomes a question of finish – it’s a case of ‘Do I like it?'”

According to Hollington, the criteria for the use of different surfaces and finishes are “veracity, risk, innovation and colour, coupled with a greater number of properties”. His words strike a chord with a number of pundits, all of whom pick three or four common themes that are happening now, or are on the verge of doing so. In no particular order then: truth, layering and light are the most frequently cited.

Dale Russell, of Cambridge design consultancy Russell Studio, adds a further twist to the package: emotion. “With design, there is also a need for emotional response on the part of the user and a responsibility on the designer to provide this interaction,” she says. In many ways, this offers an explanation for the iMac phenomenon: simple aesthetic appeal.

Of all the categories, truth seems the most straightforward. For Hewett, it’s a trend that means letting materials own up to their origins. She offers MDF and wood grain as illustrations: “These are materials that are almost ubiquitous, and in spite of different styling treatments, you can still see what they are.” But the devil is in the detail. “Truth to materials” still means that finishes can be far removed from the original source. Hollington’s “technological trajectory” is clear in a treatment referred to by Hewett: “Timber from ayous (a West African tree) or Italian poplars is peeled, trimmed down and then placed in dye vats. It is then dried off to make square logs that are re-cut, re-dyed and formed into different logs and so on.” The final product and finish are a considerable distance from the raw material, but no pretence has been made about its origins.

Nick Gant, 3D designer at BoBo Design, puts the point succinctly: “It’s about taking a material and reconstructing it to give something new. It’s something that we’ve been doing with frosted flat sheet Perspex for some time now. We take a sheet of Perspex with a sandblasted effect and then we laser-cut, we chop, we mould and then we rebuild to create something new: a different finish.” This process is also known as “morphing”.

At Philips, wood, high gloss ceramics, leather and a sense of the “real” characterise much of what is under development. Vissers says, “Honesty means using materials in such a way that objects look almost as if they are in crude form. This allows the ‘beauty mistakes’ to be apparent.” Philips is currently conducting “studies”, using leather and wood as potential finishes for televisions. Vissers justifies this by saying that the trend is towards TV sets that look “more and more like furniture”, although this would not appear to be a perfect marriage between form and function, or any kind of statement about material integrity.

That said, for mainstream consumers the now familiar brushed metal finish of large flatscreen TVs, produced by Philips and almost every other manufacturer, is something that will be around for the foreseeable future – if the evidence of out-of-town retail sheds is anything to go by. In spite of both Hollington’s and Vissers’ faith that consumers, in design terms, are “up for it”, Vissers notes that the mass market is “not really that avant garde”.

However, the combination of hiand low-tech that a leather TV would appear to embody is more than a nod in the direction of “layering”. Layering, by its very nature, usually means trying to create a particular surface or finish that conceals something else. But most designers seem to agree that layering now is being used differently. The launch last year of the Kodak Advantix T700 zoom camera, designed by Hollington Design, which combined steel with rubber, shows the process in action. Here the materials work together, with contrasting strata laid bare. There is a reminder of layering, coupled with a “what you see is what you get” forthrightness in the same product – two surface trends for the price of one.

The hard and soft layered trend is evident in a range of appliances produced by Ideo for Far Eastern company LG Electronics. Hecht says: “I’m really interested in the ‘naturalness’ of materials. For the LG fridge, we used stainless steel, a solid natural material. We combined this with natural rubber, which is terracotta in colour, to soften the product. All the controls and the control panel have been made from this rubber. So when a person sees the product, intuitively they know it’s rubber, they feel it.”

Katz says that “you can now overmould soft feel plastics on to a hard substrate, using thermoplastic elastomers”, something that has been used effectively in the “good grips” range of hardware from Oxo International, launched during the 1990s and designed by Smart Design. With a range of products from egg whisks to kettles – now more than 300 items, extreme contrasts between layers have almost become normal. As the good grip name implies, the rationale is making products fitter for purpose, rather than any cosmetic whim.

Hollington points to a similar effect in a different context: “One of the great recent discoveries has been soft feel paint. It’s generally just a few microns thick – a polyurethane paint, but it gives a particular texture to a surface. Soft feels like this are opening up a world of possibilities in anything from cameras to car dashboards and personal digital assistants.”

Micro layering is something Hollington believes in: “It’s an area that could well explode in the next few years, if not months. If you take car interiors, concept cars are looking more at interiors than they are at machines. Generally, cars at the moment may look different on the outside, but it’s the same old grey within. Ford has just shown a new concept car called the 49er. It has a 1950s feel to it, but the interior uses a combination of red-painted and brushed aluminium. It’s going to be very influential.” The effect is achieved through micro layering.

Surfaces, finishes and materials look set to be as various as the uses to which they are put. If the mix and match tendency that juxtaposes widely different effects continues, the future will be an exciting time. Perhaps the final words belong to Hewett and Russell. At Formica, Hewett sees exotic combinations as the way forward: “There are African influences, but these are being coupled with the Icelandic trends that have been around for a while.” Layering not just on products, but at a cross-cultural level. Russell says: “A cross discipline approach with a repertory of materials challenging past conventions exists, as seen with the originality of Apple’s white Cube beside the iMac. A renaissance is taking place – surfaces that might have been seen as kitsch or craft are ready to be placed alongside new technologies and can now emerge in this changing context.” Be prepared for the totally unexpected!