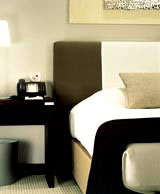 Scheduled to open in April, The Lowry Hotel will finally give Manchester a taste of Rocco Forte’s five-star treatment.

Situated in the city’s centre on the Salford/ Manchester border, the newly built £30m hotel is part of the Chapel Wharf Developments on the banks of the river Irwell, next to the Spanish architect Santiago Calatrava’s Trinity Bridge.

Principally aimed at the business traveller, The Lowry offers a separate floor for conference and banqueting and can accommodate up to 400 people in the Grand Ballroom, theatre style. The leisure side of The Lowry is represented by a riverside restaurant and bar with private dining area, a fitness centre and six treatment rooms for holistic and beauty treatments. There are 164 air-conditioned bedrooms, including six deluxe suites and the presidential suite. “All the bedrooms feel very spacious,” says design director of Rocco Forte Hotels Olga Polizzi. “My brother [Rocco Forte] has an obsession with large bedrooms.” Italian style is confidently represented by bespoke furniture from Tisettanta, which has also created a red leather chaise longue aptly named the Olga chair. Clean simple lines with earthy, muted tones characterise the bedrooms. Bathrooms are equipped with pampering accessories such as scented candles and the hotel chain’s own brand of toiletries, while the Lowry theme is picked up by a reproduction depicting two fishermen, “which look vaguely like they are peeing”, says Polizzi.

All rooms contain state-of-the-art technology, from two phone lines to a fax/modem port, and the suites offer the bonus of a video conferencing facility. David Collins was called in to design the first-floor public areas, as well as the conferencing facilities, with the brief to create interiors which were sympathetic to the modern architecture, while providing a glamorous environment for hotel guests.

Both the bar and the restaurant feature bamboo flooring with a fumed finish.