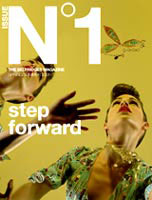 Wink Media, which is owned by the Wallpaper Group, has produced and edited Selfridge’s store magazine. The spring/ summer issue of Issue No 1 will be launched on 9 March. ‘We have taken the new season’s advertising budget and moved it into a magazine,’ says Selfridges marketing director Nick Cross. Issue No 1 features work by photographers Tim Bret-Day and Rebecca Pierce, plus illustrations by Fabrik.