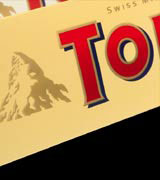 Siebert Head has redesigned the packaging and identity worldwide for Swiss chocolate brand Toblerone, to update its look and make it a more global brand. It won the £160 000 project following a three-way, paid creative pitch against Landor Associates and Design Bridge.

The redesign sees a return to the brand’s heritage in the Swiss Alps and its city of origin, Berne. The Matterhorn mountain was the original inspiration for the triangular shape of the chocolate and this heritage has been reinforced with the inclusion of Berne’s city icon, a bear.

The bear/ mountain icon replaces an abstract blue triangle with a white “snowy” peak and the manufacturer’s name, Tobler.

The “chamois” yellow of the box has been lightened as the client felt the darker shade appeared yellowed with age. The colour has been lightened around the Toblerone brand name to lend it greater stand-out on-shelf and the logo itself is now brighter. “The brand currently suffers on-shelf as its trademark triangular shape can get lost,” says House.

Siebert Head has introduced a triangular matt and shiny gold background to the duty free packaging to reflect its status as the second biggest duty free purchase after spirits, she adds.

“Toblerone is the ultimate airport shop chocolate gift, and is synonymous with travel. We wanted to lend it more premium brand values to differentiate it from the Toblerone available in high street stores,” she says.