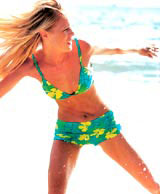 Women’s sportswear retailer Sweaty Betty has commissioned Portland to give it a makeover, including a new identity. The consultancy, which won the project after a four-way pitch against unnamed groups, has been briefed to work on branding and interiors for the retailer’s stores in London’s South Kensington, Westbourne Grove and Fulham. Sweaty Betty plans to roll out the concept to 50 stores nationwide over the next five years.