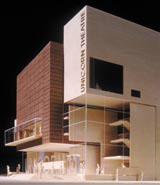 In 1993, the Unicorn Theatre for Children’s then artistic director Richard Williams sent an earnest letter to newspaper The Independent. Children’s theatres ‘might as well be invisible’, he wrote. ‘Reviews of our work are as rare as hen’s teeth. Surely work for children has to be taken more seriously? Or what audiences will there be in the future?’

A decade on – and despite a burgeoning respect for children’s literature, thanks to the likes of JK Rowling – the situation is little better, says Unicorn marketing director Emma Simon. ‘The conversion hasn’t happened yet,’ she says. ‘Children’s theatre is not taken seriously.’

But this looks set to change, for the Unicorn, at any rate. Next year the theatre will draw a line under its peripatetic existence and move into purpose-built quarters in Southwark, south London.

The Keith Williams Architects-designed building will include two auditoriums, rehearsal and education studios and public spaces. This will allow the theatre to put on 14 shows, eight of which will be home-grown – and to benefit more than 100 000 children each year (DW 30 October 2003).

Since July there has, of course, been the presence of Simon herself, who was brought on board to raise the profile of the theatre. Simon’s laid-back manner and funky dress sense – she’s wearing a fuchsia, velvet overcoat when we meet, with lipstick to match – creates the impression of a quirky, creative type. Yet there is an iron hand beneath the velvet, and Simon is uncompromising when it comes to her goals for the Unicorn.

‘We need to start shouting instead of whispering,’ she says. ‘I would like the Unicorn to go from being a well-kept secret to a name that is recognisable, and not just by one class of people with children of the age to take to the theatre.’

Simon has a firm belief in the power of ‘clarity of brand’ and is already looking to design to help her to turn the Unicorn’s straw into gold. Last autumn she worked with The Formation Creative Consultants in developing marketing materials for the theatre’s spring production of Clockwork.

And, just before Christmas, she secured the services of Pentagram, which over the coming months will restyle the Unicorn’s logo, create brand guidelines and work on its marketing materials. Sometime ‘in the first half’ of 2004, Simon plans to approach design groups to give the theatre’s website a ‘massive overhaul’ (DW 8 January).

‘I think if you’re going to create a profile, then you have to have the right identity, the right visual material, the right marketing material. You have to have a style that reflects what you’re about, and it has to be consistent,’ Simon asserts.

‘There are so many incredibly professional arts organisations these days that you really do need to raise your stakes.

‘It’s not enough to say, “I’m an arts organisation or charity organisation, and I don’t have the wherewithal to produce material that reflects the standard of [my] exhibition or [my] play”.’

Simon hopes the Unicorn’s sharpened-up brand image will help to align it with the theatrical ‘great and good’, such as the National Theatre and the Royal Academy of Dramatic Art.

‘We pride ourselves on being a grown-up theatre for children and producing [work] that is of the same standard of the very top theatre produced for adults,’ Simon explains.

The Unicorn’s forthcoming brand identity needs to be a ‘subtle thing’, she adds. It has to work on a number of levels – helping the theatre to attract new audience members without alienating the old and, more importantly, appealing to children as well as to adults. ‘Our audience is made up of layers, adults and children. We want to create something that is attractive to both,’ Simon says.

‘I think [we] can do that. One of the dangers we fall into with children’s theatre is to patronise and to assume children don’t get things,’ she adds. ‘I think they do and they should be allowed the opportunity to read into things.’

It will also need to give the Unicorn a boost as it seeks to entice potential audience members from its competitors. Simon identifies perennial competitors like television and video games among the more direct such as Legoland and West End shows.

And she is optimistic the new look will go some way towards dispelling the public’s misconceptions about children’s theatre. ‘I think [it] can be seen as a little bit twee, a little bit fluffy and not really of great value – as a treat and not something that actually challenges and stimulates a child,’ Simon says.

With Simon’s eye on design and commitment to the brand it will be interesting to see if the Unicorn can challenge audience perceptions and its marketing-led competitors, and move children’s theatre into a new dimension.

Appetising pie in the sky