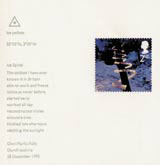 Old techniques such as engraving and die-stamping have never lost their ability to satisfy people’s desire for the distinctive. Developments in graphic design and computer power have made this timeless, luxurious approach to laying down ink on paper more appealing than ever before. But such processes are often overlooked by print specifiers, and while die-stamping, for example, is popular elsewhere, particularly in the US, it is a different story in the UK.

The process fell out of favour with British designers due to lack of publicity and this, coupled with new approaches to design in the 1960s and the vagaries of typographic fashion, meant the face of die-stamping no longer fitted. It was believed to be an outmoded practice using archaic machinery to produce prohibitively expensive work.

Engraving in printing finds its roots in the 15th century, when it was a process valued for its precision and detail and was used on documents both legal and regal. In the 19th century, the procedure was modernised with the introduction of electroplating, and by the first half of the 20th century die-stamping had become the favoured process for stationery.

In the 21st century engraving has been updated with the advent of computer software and micro etching. It is now a sophisticated process capable of reproducing all types of artwork with outstanding accuracy. UK publisher and designer of first-day cover envelopes Paul Smith has, for example, used die-stamping for more than 30 years, because ‘it is a terrific medium, the Rolls Royce of printing. No other process can achieve such depth of colour, accuracy of register, or such fine detail.’

Designing for die-stamping and the like is much like any other printing process. An output from an Apple Mac or a simple pencil drawing are all that is required to begin the process. But the addition of the third dimension means fine detail can be incorporated in designs that are limited only by imagination. If engraving and die-stamping are to survive the 21st century it is up to typographers, graphic designers and print buyers to acquaint themselves with the processes and start specifying.

CDT Design’s 2004 New Year card ‘Let it snow, let it snow, let it snow?’ uses debossing to incorporate a greeting message in Braille. This was to signal the introduction of the Disabilities Discrimination Act, an area in which the consultancy has been doing a lot of work. The design is by Neil Walker and Nevs Hamling, printing by Moores and debossing by Benwell Sebard.

CDT’s promotional book, designed by Christian Altmann, uses debossing by Benwell Sebard on the cover to reveal the number ‘2’. Printing is by First Impression.

Embossing by Benwell Sebard was used on the material for the Royal College of Art’s 2003 show – a series of four exhibitions featuring work by all the college’s graduating students. Design is by Alistair Hall and printing by Identity.

After GBH’s success in Fedrigoni’s first Imaginative Print Awards 2002, the paper company commissioned GBH to design both the call for entries and awards graphics for the 2003 competition. The awards allow entries from both printers and designers that have produced creative work on Fedrigoni papers.

The calmness of GBH’s design makes these awards different from its competitors, as well as continue to raise awareness for the awards themselves and further promote the Fedrigoni range.

A simple, minimalistic booklet was created to explain the call for entries, demonstrating what can be achieved using the minimum of print and embossing, both carried out by Malvern Press in London.

‘The design is sensual and understated. GBH has fully understood and promoted the ethos of our awards and what the company stands for in the paper marketplace,’ says Fedrigoni marketing co-ordinator Daniela Oberti.

Husband and wife team Webb and Webb recently completed a little book of Andy Goldsworthy Christmas stamps for Royal Mail, entitled Journey, featuring engraved and debossed type. The theme of the book is ‘footprints in the snow’, according to Brian Webb. ‘We used TS Eliot’s poem Journey of the Magi for the debossed type and printed Goldsworthy’s descriptions of making the sculptures in letterpress. The stamps are the real thing,’ he adds.

Debossing and letterpress printing was by Hand and Eye and hand-binding was by Shepherds.

What are engraving and die-stamping?

Engraving is the technique used to remove material from the surface of a steel die in the precise shape of a design. The areas removed are filled with ink and printed, and the design is left in relief. Some designs use acid to produce the printing plate: this is known as copper-etching. Whether a plate is engraved or copper-etched, it is printed using die-stamping machines. Ink is applied to the printing plate and any excess is removed from the non-printing areas. The substrate is then forced under immense pressure into the engraved area of the plate. This combination of ink and embossing gives an impressive three-dimensional look and feel to the image.