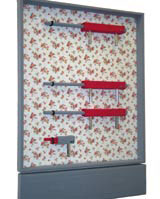 No one could accuse Craig Fisher of lacking ideas. Articulate and hyper-garrulous, he talks 19 to the dozen about the many themes explored by his soft sculptures, which he often adorns with buttons, ribbons and zips. Vacillating between fine art and design – his work often looks like furniture and clothing, but is in fact dysfunctional – they challenge gender stereotyping, hint that violence can erupt even in seemingly innocuous suburbia, take potshots at self-serious technology (particularly military hardware), lampoon science fiction and satirise today’s obsession with buying into a ‘lifestyle’.

Fisher makes a point of fusing high and low culture, referencing cartoons, movies, fashion and fine art. American Beauty and Matt Groening’s cartoon, Futurama, have inspired him as much as artists such as Louise Bourgeois and Philip Guston.

Twentysomething Fisher – who did a BA in fine art at the University of Northumbria, then an MA at Goldsmith’s college in London – is also influenced by semiotics and feminist art theory. All this takes no account of a whole host of other inspirations that he doesn’t mention during our meeting: the floppy, pop sculptures of Claes Oldenberg and the tent-like clothing of artist Lucy Orta and streetwear label Vexed Generation, which is concerned with issues such as homelessness and surveillance.

Fisher’s brain is like a sponge that has soaked up countless influences – both intellectual and stylistic. But hearing him stress that he is mainly concerned with debunking gender stereotyping – chiefly, that highly nebulous concept, ‘masculinity’ – gives these ideas a focus.

‘I’m interested in what I’m allowed to be as a man,’ he says. ‘My work asks questions about gender and identity. In my first pieces, like Space Cadets, I looked at boyhood fantasies – like wanting to go into space or be a sports star. As a boy, I was never interested in those things. I wanted to make art, paint, go shopping…’

Fisher’s work can also be identified as part of a growing movement of male artists and designers who sew and embroider – a trend celebrated in an upcoming Crafts Council exhibition, Boys Who Sew, in which he is taking part.

Despite its serious side – its mockery of machismo, from puerile, Boy’s Own pursuits to actual warmongering – it’s also playful. He delights in making visual puns. For example, he will sew on mother-of-pearl buttons to allude to the buttons on control panels used to launch missiles – this fetish for haberdashery reflects Fisher’s passion for fashion. ‘People on my MA course, who knew I loved fashion, kept saying, “Why don’t you use fashion fabrics in your work?”,’ he says. ‘So I started going to Bond Street – to Miu and Miu and Prada – where I got lots of inspiration.’ Indeed, on his piece, Flip the Switch, he appliquÃ©d a very Miu Miu-like strip of fabric with sugary pink, lilac and navy blue stripes – a camp take on military decoration.

Fisher’s juxtaposition of cliches of ‘masculinity’ and ‘femininity’ are more subtle and sophisticated than they first appear. He uses a rich variety of fabrics, exploiting their different social connotations – from sporty, gung-ho Gore-Tex and neoprene to twee Laura Ashley-esque chintz. Another piece, Tread Carefully, mounts fake machine guns in a simulated gun cabinet, backed with a rose-print fabric.

The frivolous, decorative details in Fisher’s work have led some to assume – mistakenly – that he’s gay, not that this fazes him. ‘At college, some people said my work was like [gay artist] Steven Gontarski’s, which meant I must be gay,’ he says. In fact, the decorative quality of Fisher’s work underlines the fact that its apparently functional elements – like the headboard that hovers above a hollow, tent-like structure in Space Cadets – don’t work. In Fisher’s art, utility is almost a byword for futility. By denying such potentially sinister objects as guns any function, he satirises the self-deluding self-importance of technology and ‘masculinity’. (Fisher says another influence on him is Michael Moore’s movie attacking American gun culture, Bowling for Columbine.)

Does this fascination with the dysfunctional mean he’s interested in Surrealism? ‘Yes,’ he says. ‘I was looking recently at Meret Oppenheim’s fur-covered cup and saucer.’ Seemingly functional objects in his pieces are all the more dysfunctional for being two-dimensional.

‘I’m interested in the difference between a real object and the image of it,’ he explains. Which brings us to another of his interests – the discrepancy between an object and the lifestyle it comes to represent thanks to how it is advertised. Clearly, Fisher is as fascinated by semiotics as he is by sexual politics.

Some might feel he should hone his ideas – make his work more succinct. Does he ever think that himself? ‘No,’ he says. ‘I want it to be ambiguous, open to different interpretations. I like the idea of people looking at it, then doing a double-take.’

Boys Who Sew is at the Crafts Council, 44a Pentonville Road, London N1 from 5 February to 4 April