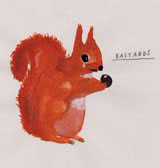 Paul Davis’ first book, the excellent Blame Everyone Else (Browns, 2003), was a sensitively designed volume of drawings, doodles, observations and photographs. The net effect of leafing through the pages was rather like surveying the contents of somebody else’s fridge. It was an individual, slightly random and highly personal experience. So his new book, Us & Themâ€š which sees Davis turn his attention to the recording of other people’s views on a single subject, is a marked development.

The publication of this book is timely, as the aftermath of crisis and war usually gives rise to a collective need for reflection and analysis. The subject of national identity becomes doubly fascinating when we have the opportunity to overhear what our neighbours or our distant relatives are saying about us.

Davis asked hundreds of people on both sides of the Atlantic a simple question, ‘Excuse me, what do you think of the British/ Americans?’ By transcribing their answers verbatim and adding his familiar style of portraiture, Davis has created a clever satire on the ‘special relationship’ between the two countries.

The book is divided into two halves. These are positioned end to end and meet in the middle, so that one half is upside down to the other. It is a familiar device but it works well here, conveying a sense of the misunderstanding that occurs between two cultures that are divided by a common language.

The primary impression is how quickly people resort to familiar generalisations and bigotry. This is especially true of the British impression of Americans, although the counter view suggests that Americans base their knowledge on such scant information that the answers range from the absurd to the plain bizarre. This allows Davis to give full vent to his satirical skills – some of his most grotesque portraits are animated by odd responses.

It is all great fun. Davis even manages to deal with the obvious clichÃ©s (‘you have great accents’) with sly wit. That said, ignorance abounds and genuine insights from either side of the Atlantic are all but absent. If there is a criticism of this book, it is that by asking such a basic question and soliciting such an immediate response, we get a shallow indication of how badly we understand each other.

I can’t imagine a book of the same material illustrated by, say, Polaroid portraits, being anything other than banal and depressing. It is a credit to Davis’ ability to draw out the personality of his subjects with such absurd – and often scathing – humour that we gain deeper insight into the inanity of the human condition. Few artists this side of George Groz have the ability to satirise with such deftness and feeling for the times. Davis’ choice of quotes for the flaps says it all. A Briton on America: ‘Lets face it: they run the world and I wish they didn’t.’ And an American about the Brits: ‘Who cares?’