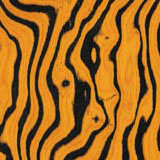 ‘I’ve always had an interest in typically British, particularly northern British, products, hence the reason I use so much Formica in my work. The company [called Formica] is based locally in Newcastle, and enjoys something of an ironic coolness.

‘I’m working with Formica in my Gateshead housing project, using it in kitchens and storage. People forget it’s actually a veneer and is aesthetically hugely versatile – it can be printed on, patterned or even reproduce photographs. Formica is experimenting with new finishes: its recent ‘Design a Laminate’ competition was won by [surfaces designer] Chris Hill, who created a pattern that looked like coffee spillages and mug rings, recreated in pencil.

‘I used Formica in 2001 on a large scale when I designed the interiors for the Institute of Directors’ IoD at 123, but in a highly traditional, 1950s Scandinavian woodgrain way. But now it’s so versatile, particularly as digital technology has progressed. It’s kitsch, but designers should have no shame in using it.’

Formica is launching a second ‘Design a Laminate’ competition at 100% Design, which runs 23-26 September at London’s Earl Court.

‘We have been using felt for a while in various applications – more obviously in upholstery; and most recently in the enlarged Windle hair salon we completed in Shorts Gardens [in London’s Covent Garden] a few months ago. The interiors we produce are often quite ‘hard’ for all sorts of good reasons – durability, maintenance, wear and so on – so it is good to get something softer and more absorbent to complement other finishes.

‘Felt comes in an amazing array of colours and thicknesses, and while it is a natural material, it has a homogeneity that lends itself to more abstract design moves. For example, you can play down seams in a way that you can’t with leather.

‘It is also affordable, both to supply and fabricate, so you can take a view on things lasting a short time and being replaced fairly frequently, and therefore still look good at modest cost.

‘Perhaps the most interesting use we have made of felt recently is in the This Works spa/ beauty product shop on Chelsea Green, which opened in April. This small interior was largely a play on white surfaces in different materials and textures. The floor is white rubber with inset circles of white carpet, and walls are painted white except for a large panel of white felt.

‘The felt manages to make the space, which might be harsh, and could be acoustically uncomfortably “bright”, seem strangely welcoming, even womb-like.’