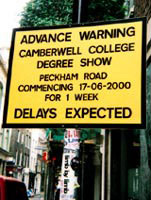 A cheeky third-year design student at Camberwell College of Art has claimed victory, after putting up 50 mock road signs around London advertising his college’s degree show last weekend. Dean Field’s ‘unofficial campaign’ included placing a sign outside Tate Modern. However, Field and his accomplice avoided being reprimanded by wearing high visibility work vests similar to those worn by the security officers. The college itself recognised the ‘effective and convincing’ signs, but says it didn’t consent to their use.