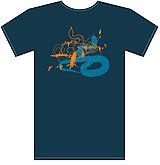 Award-winning illustrator and screenprinter Kate Gibb, in collaboration with creative consultancy Museum, has designed a range of T-shirts featuring the 12 animal symbols of Chinese horoscopes.

Gibb, who recently won Music Week’s creative and design award for her work with the Chemical Brothers, including sleeve design, is represented by Museum.

The London consultancy handles project management and design across all mediums, as well as acting as agent for a handful of illustrators, including Gibb. The consultancy developed the initial concept for the horoscope T-shirts, before commissioning Gibb to introduce her trademark use of colour to the project.

The T-shirts will be available from this autumn in four colour ranges – lilac, olive green, dusty dark blue and mint green, says Museum strategic planner Jeremy Brown. Aimed at both men and women, they feature a solid colour image of an animal, overlaid with hand-drawn outlines of the same character, creating a subtle, abstract evocation of the original symbol.

Gibb says: ‘The Chinese have used horoscopes for centuries to define character and temperament. By putting each symbol on a T-shirt, I am allowing people to express their true identities.’

Accompanying point-of-sale material created by both Museum and Gibb will reflect the design of the T-shirts and includes an explanation of the tradition behind Chinese horoscopes. Customers will also be told under which symbol they were born.