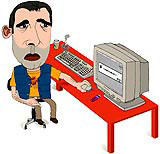 Youth rules in the design industry. Look around any design studio and the age-profile is almost always between 25 and 35. Consultancies want their creatives young, fresh and thrusting – unlike in the architectural world where architects come into their prime at twice that age. But what happens to designers when they get a little bit older? Where do they all go and how can they put their skills to good use? For some, the answer is management, moving up the company ladder to a position that may be more senior, but demands less creativity and more new business skills. Others, convinced they still have something to offer, but are not interested in project management, strike out on their own. But for many, fed up with long hours and disillusioned with designing yet another Pot Noodle pack, working in design may have ceased to be rewarding, and those who are brave and unhappy enough look elsewhere.

While the Chartered Society of Designers maintains that design is a profession for all ages, there is no denying that in the job market, age is a major issue. Recruitment consultancy Gabriele Skelton acknowledges that the design profession is ageist. “I think it’s fairly disgusting,” says director Janine Hall, who finds it much harder to place 40-plus designers, however good they are. Often such designers feel obliged to drop their rates. “Employers feel uncomfortable with older recruits because they are much younger themselves. They forget they’re much more experienced and can work quicker,” she says. But she adds: “The really, really good people are always OK – they still seem able to survive.”

Age pressure is not so acute in the account handling side, which often attracts designers as they get a little older. Even then, “eyebrows are raised once you hit 40-45,” says Gabriele Skelton director Karina Beasley. In the case of some, like Sarah Sargeaunt, the enthusiasm simply ran out, not helped by the changes in working methods during her 20-year career in design.

For freelances like Tom Sutherland, already used to a different working lifestyle, leaving design was a combination of wanting to try something different that was still creative and feeling frustrated with the work. “The burn-out rate is quite high,” he says. “Because you have to be passionate and dedicated, the investment is quite high, with a lot of late nights and weekend work.”

“Despite problems of ageism, motivation is up to the individual,” says Rob Cameron, chairman of design group Flag, which specialises in the – for some – appealing social responsibility and environmental sector. “The answer is to make it more interesting. It’s not just environmental and social responsibility work but a breadth of media and clients that makes you want to get out of bed in the morning.”

But if not design, what are design skills good for? The CSD maintains design training gives an ability to problem-solve which is useful in other careers. Often the answer for the disillusioned is a sideways move – several of the Gabriele Skelton directors, such as former Michael Peters Group creative director Jacky Vicary, are ex-designers themselves, and many move into other fields of design. When Sargeaunt reached this stage, she moved into special painting effects, a discipline that is related to design.

But for those with a spirit of adventure, there can be fulfilment in completely unrelated careers. As Sara Stickland, an interior designer who left the profession to set up a restaurant, and designer-turned stand-up comic Sutherland demonstrate, there certainly is life after design.

After 15 years in the design business, interior designer Sara Stickland had “a very premature mid-life crisis”, walked out of her job at MPL, and ended up running her own diner in London’s Battersea. “I decided to jack it in, in a fit of pique, then realised that I wasn’t qualified to do anything else,” she says, fearing that at 35 she’d end up on a supermarket checkout. Then came the idea of setting up the diner. “When I was at MPL a lot of the work I’d designed was hospitality, food and leisure-oriented and I thought ‘Why doesn’t someone open a really good diner that doesn’t smell of grease’.”

With her design experience she had a good idea about what would and wouldn’t work, putting her skills to good use on the design of her restaurant. “The hard bit was finding a chef. Then he resigned on the first day,” she says. She soon got over the teething problems and her diner, Boiled Egg & Soldiers, has thrived for five years on Battersea’s busy Northcote Road.

Ironically, the move has not been a relief from the long hours demanded by many design consultancies – the diner is open seven days a week and she currently works six of those, but enjoys the diverse assortment of staff (many of whom are students or in the process of changing careers themselves) and customers. She also finds it easier to switch off at the end of the day than when she was a designer, when the job was permanently on her mind. “Sometimes I miss design a lot. But I quite enjoy what I do. It’s a very nice area to work in… Now I probably enjoy design more at arm’s length.” As for the long term future, Stickland is unsure, expecting to need a new challenge at some point, such as franchising the diner. “I don’t want a Jay cloth in my hands for the rest of my life.”

Packaging designer to stand-up comedian is not the most obvious career move. For Tom Sutherland, now re-entering the design profession after six years away, the need to try something different was a gradual revelation. “It doesn’t happen all of a sudden – it creeps up on you and you’re always feeling there’s something else you’d rather try,” he says. “I was looking for a new challenge. I wanted another outlet for my creativity. It was more like having a breather.”

He had trained at Central St Martin’s and worked at Beresfords, Smith & Milton, Blackburn’s and Landor and as a freelance designer for several years, the latter paving the way for his career change. “Once you’ve got a taste of freelancing it doesn’t bother you if you’re in a full-time job or not. It gives a different slant on things. I learnt more as a freelance about cracking a brief and [worried] less about managing and office politics.”

However, a lot of his freelance work was new-product development, which proved frustrating. “I was seldom in a position to see the whole project through. A lot of the best concepts bit the dust, and for that to happen time and time again was soul-destroying,” he says.

First, he went back to Glasgow and did a multimedia course, then a one-year acting course. “When I did free myself up, having worked my way up the career path and earned good money, the alternatives were starting from scratch, but acting seemed to be equally challenging.” After some theatre and film work he moved into comedy, developing a stand-up routine around his character, Kenny (“a comic genius trapped inside the mind of an idiot”, inspired by various Glasgow characters).

For the past year he has performed in Scotland and London, reaching the final of New Act of the Year at the Hackney Empire and currently in the semi-finals of the Daily Telegraph Open Mic Award. Ironically, his stand-up work rekindled his interest in design, when he set about creating promotional club material. “It’s like reaquainting myself with an old friend. It was nice to know I hadn’t lost it,” he says.

It was not the lure of an alternative vocation that led Sarah Sargeaunt to give up graphic design after 20 years. Unhappy with the increasing emphasis on computer-based design, she no longer enjoyed the career that had once been so fulfilling. “I just hated it in the end. We used to hand-colour pack mock-ups and by the time I stopped, I was in front of a computer screen eight hours a day… I became increasingly bored. There are only so many packs you can design.”

Sargeaunt had worked for Design in Action, Landor, Design Bridge and then freelanced for consultancies such as Coley Porter Bell, but found it harder to carry on with design after having children. She gave it up two years later, aged 39. “Forty for me was what I saw as the oldest age I could do it,” she says.

Now Sargeaunt paints furniture and murals and does some colour consultancy for interiors, and is hoping to go back to college to study sculpture. A return to design is unlikely. “I don’t miss working at the computer at all. But I miss my income – I worked four days a week and earned a fortune as a freelance,” she says.

Collins to set up US base