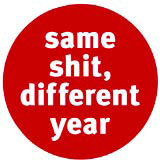 How glad I am that all my efforts for the last three years aren’t being advertised around the streets of London as “Same shit, different year” (Diary, DW 16 June).

I am not sure what the graphics students at Central St Martin’s are trying to communicate by use of such an offensive banner, so on that level alone they have failed to impress me with one of their (you would assume) primary goals – to communicate clearly.

It conveys arrogance, dissatisfaction, immaturity, and behaviour I’d associate with spoilt kids who pick the wrong time to complain about something.

I won’t be visiting the show, and would certainly never seek to employ a young designer who was anything less than bursting at the seams with enthusiasm to embark on their career in design.

The only positive experience I get from their campaign is the mental image of me as head of the college turning a fire hose on all of the students, gathered in a large hall to hear my morning message: “Wake up, and get a life”.

Work gets a dressing down by killjoy Prince