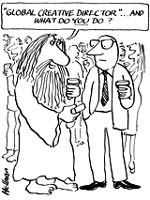 So Jon Turner of The Body Shop is confused about his job title (Diary, DW 26 May). First, he informed this magazine that he was “head of creative direction”. This, he explained was to help staff understand his role. Why not simply “creative director”? Perhaps there is more than one? After all, the title could suggest that creative direction is emanating from several sources and that Jon is coordinating it all.

An ad agency used to have but one, omnipotent creative director. Indeed, there was often a solitary art director, not to mention a copy director (or chief). The latter title faded away, but the former blossomed. So, the thinking went, if there were many art directors why not more than one creative director? I remember a time at Ogilvy & Mather when there were eight.

When Design Week checked Turner’s title he said he was “head of global design”. This has an undoubted grandeur, but note the position of the adjective: he is not “global head of design” which would put him up there among the luminaries.

“I can see from your CV that you started as a writer.”

“In the beginning was the word.”

“I mean your career.”

“This bit in your portfolio under new product development. Water into wine. Red or white?”

“Six days on and then a rest. But I do a lot in the time. My days are swifter than a weaver’s shuttle.”

But back to Turner. He is not global head of design, but head of global design. This could still be a massive and important role. It all depends on how much global design is going on. In The Body Shop, I should imagine, quite a lot. In other companies the title could be a sinecure, a sop, perhaps instead of a pay rise.

The saga, however, continues. A few days later Design Week asked a colleague of Turner’s for his title. “I’m not quite sure, but I’ve got it down as ‘head of creative’.” Seconds later, he was back to say that it was, in fact, “head of global creative services”.

Now this is far less impressive. Creative services are important, but a support function no matter how international. Perhaps the confusion could be cleared up by getting Turner to write his own job description. What do you do exactly? It’s a rewarding exercise answering that question.

The finance director of my company once challenged each member of the board to write his/ her own job description. I was chairman. I wrote: “I carry the flag and carry the can”. Good name for a pub I thought later – The Flag and Can.

But what is a good name for what you do? Is your title an accurate reflection of your job? Does it matter? Hadn’t you better act “global”?

A quick flick through my collection of business cards threw up surprisingly few pretentious titles. Admittedly, some are more difficult to understand than others. What exactly is a “special advisor” or a “category strategy member”, for example? And when does a “deputy worldwide management supervisor” come off the substitutes’ bench and what is he doing in the meantime?

The majority of titles in my collection are simple and straightforward – managing director, marketing manager, brand manager, creative director. And the descriptors of people not in a company, but working for themselves are short and to the point – journalist, designer, writer, researcher. No hierarchical pretension, no obligatory global this or that, no qualifying terms whatsoever. “The adjective”, said Voltaire, “is the enemy of the noun.” A fellow countryman of his provided me with my favourite minimalist card. No noun, let alone adjective. Simply “Pierre Lanson. Champagne Lanson”. I bet he’s not confused about his job title.