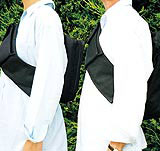 Anti-Copying in Design has achieved a settlement on behalf of a company which claimed its designs had been copied.

The clothing company originally launched the single strap bag, which crosses over the shoulder using Velcro, in 1995. Several other companies, including Badge Sales, produced similar and cheaper versions, which flooded the market and lead to a decline in sales of the Vexed bag.

As a result, Vexed Generation sought advice from Anti-Copying in Design to bring legal action against Badge Sales, resulting in a £16 363 compensation settlement.

Vexed Generation partner Adam Thorpe says: “We were committed to enforcing our rights over this design – it’s original and unique to us and having similar styles out in the marketplace was commercially damaging to our business.”

Acid chief executive Dids Macdonald celebrates the victory saying, “This clearly demonstrates the significant role Acid can play in the protection of a designer’s or manufacturer’s intellectual property right.”