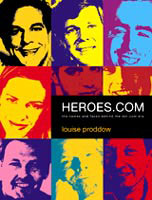 The pace at which the world goes by appears to accelerate every day. And a core element of this high-speed society seems to be the Internet.

Accepted as an essential part of life today, the Internet has sparked a dotcom revolution, with everyone and anyone desperate to come up with the most original domain name and website.

Such is the pace of this phenomenon that parts of a book published last week, investigating the rise of movers and shakers in the dotcom world, are already out of date.

Heroes.com – the names and faces behind the dotcom era, is a new book detailing the impact of 58 Internet entrepreneurs who are shaping the digital economy. “Heroes is one of those terms that can mean many things,” explains the book’s author Louise Proddow. “But for me it embodies an ideal, someone we admire, a role model, a leading figure, even a legend.”

Among those named as heroes in the publication are Michael Dell, founder of Dell Computers; Jeff Bezos, founder and chief executive officer of Amazon, and Excite managing director Evan Rudowski. Others include Richard Branson, David Bowie and film maker Terry Gilliam, all recognised for their contributions to the dotcom age.

But other well-knowns listed seem to be recognisable for the wrong reasons – Brent Hoberman, founder of the hyped Lastminute.com, and Kajsa Leander, founder of the recently-crashed Boo.com.

Ironically, it is Leander who says in the book, “We’ve built a great platform and created a strong brand. Next we want to get even better at what we’re doing.”

In unknowingly exposing the fallibility of the Web, Leander adds to the variety of this book.

“Not all the heroes in the book possess the same qualities, but they do have one thing in common, their energetic entrepreneurial spirit,” says Proddow. “They have a self-assurance and a real sense of where they are heading. They all embrace the Internet with passion and are driven by big ideas. They play by new rules and act in Internet time.”

In addition to profiles and examples of each website Heroes.com, which was designed by London design consultancy Gyro, includes a 35-page overview of strategies for success. The section features tips on generating and formulating an idea, with pie charts and graphs presenting information succinctly. Details about moving an existing business on-line, operational savings and the type of employees needed all ease the reader gently into this complicated arena, with the minefield of Web jargon broken down in the glossary.

As West McLaren Mercedes chairman and chief executive officer Ron Dennis says in the final section, entitled 101 Ways to be a Dotcom Hero, “Do not neglect the Internet – it is not a leap of faith, but a vital business consideration.”

Although Heroes.com itself may not be a leap of faith or a vital business consideration, it is certainly worth not neglecting. Because whether you have already begun mastering this new world, or are yet be “dotcommed”, this book provides an interesting and educational take on planet Internet.