The makers of Renaissance would probably throttle Robert Rodriguez if they ever ran into him in one of the dark alleys of their animated science fiction thriller.

While not specifically a Frank Miller adaptation, their film is obviously indebted to the graphic novelist’s starkly monochrome world. Yet, in bringing Miller’s Sin City to the big screen last year, Rodriguez wittingly stole their thunder.

Some bloggers have suggested that Renaissance is more faithful to Miller’s grainy, black-and-white aesthetic than Rodriguez’s glitzy treatment, which blended live action with digital effects – though that’s unlikely to cut much ice with mainstream movie-goers.

Produced mostly in France, and in development since 1999, Renaissance is clearly a labour of love. Director Christian Volckman used motion capture to give the graphics realistic heft, and preparation was painstaking. ‘Each backdrop, each character, down to the least important costume, was drawn, then sculpted to size, like a virtual statue,’ explains Marc Miance, who first devised the visual concept. 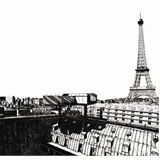 Petrolheads might be interested to learn that the cars – Batmobiles with the horsepower of Tron – were the result of a collaboration with Citroën’s design team. Despite these efforts, however, Renaissance will seem like a jilted bride next to Sin City’s head-turning, Hollywood broad.

Renaissance, certificate 15, will go on general release in an English language version by Pathé at the end of July