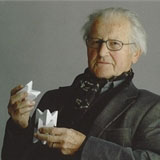 As I wait for Kurt Naef to pick up the phone, I’m trying to think of a single famous toy-maker. It seems sad that the most famous – Geppetto from Pinocchio – didn’t actually exist, but it’s fitting that, when he answers, Naef sounds just like gentle Geppetto.

If there were a real toy-maker as famous, it should be Naef. At 95, the Swiss designer, craftsman, manufacturer and businessman is still turning out wooden designs, which are arguably the most beautifully crafted in the world.

Naef didn’t begin his career as a toy-maker, but as a furniture and cabinet-maker, whose skills came from two distinct areas in his life – a love of materials learned as a child in his father’s workshop, and a knowledge of good serial production rooted in an early apprenticeship at a factory that specialised in wooden objects. These, combined with an education in interior design, a great eye for detail, a sure feel for high-quality design and an enthusiasm for form and function, learnt from his college teacher Paul Artaria (a pioneer of modern architecture), led him to create a range of delightful, Danish-inspired lathe-turned tableware that won praise in international design circles.

Selling these from a small shop in Basel brought a request from a customer for a toy that would be as aesthetically pleasing, well-made and modern as his tableware. The result was the Naef-Spiel cube of 1956 – a wooden cube into which Naef made four diagonal incisions, enabling them to be wedged into each other to create stable, three-dimensional structures. In trademark Naef primary colours, the cubes were an instant success and laid the foundations for a design workshop and manufacturing business that would last a lifetime. Within a decade, Naef had built a plant that employed some 40 people and manufactured not only his, but a large number of visionary designers’ creations. 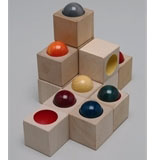 It’s this skill as both a small-scale industrialist and craftsman that has kept Naef’s work so vibrant and interesting. His ability to design, commission and manufacture great products was not unusual in mid-century Europe, but to have been able to keep it going right through to the 21st century, when 80 per cent of manufacturing is based in China, is a real achievement.

Naef puts some of this down to the strength of ideas – ‘first my own and, later on, those of other designers’. These, in particular German designer Peer Clahsen, brought with them the emerging pop sensibilities of the 1960s, not only introducing great new geometrical puzzles and games, but colouring them in rainbow formations and cool 1960s geometric patterns and combinations that captured the zeitgeist and, crucially, the imagination of a growing design-savvy public.

Even the names of the games were groovy. Polar, Caree, Ornabo, Fructus, Papillon, Modulon, Celia and Cubicus might now sound like Ikea pieces, but they were all, as Naef puts it, ‘toys with soul, high quality toys and objects with an inner value drawn from the quality and the design’. Each of these toys underwent rigorous development and research before going into production. ‘If children play with our toys, they have to be able to imagine a possible form. Then they create it. Where there are many possibilities to create different forms, this really develops spatial awareness. And the colours were chosen carefully, to help young children understand colours and attract the eye,’ explains Naef.

Naef cheerfully concedes that such toys ‘will never sell in a supermarket’. But they do give their owners something they may not get elsewhere. ‘Creativity and exploration do not come from TV or the PC. I think if you take something in your hands, then the feeling for creation comes automatically,’ says Naef. 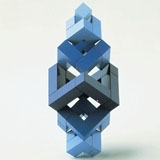 It’s true that holding Naef’s gorgeous games and creating abstract shapes with them does fire the imagination, so get your hands on one if you can. And, if you can’t, at least take a look at a new book on the life and work of Naef called, fittingly, The Toy-maker. Its text may be terrible, but the pictures of the games are enough to set any creative mind racing.