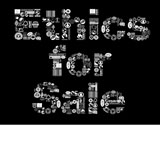 This year, The Royal College of Art Summer Show features a typically witty and eclectic mix of graphic and illustrative-led work produced by its graduating communication art and design students.

Displayed at The Show, Part Two this week, which runs from 23 June to 2 July, the exhibited items are the culmination of two years of postgraduate study.

‘It looks like wit is making a big return. A lot of the work is more angled and asks questions. The computer is also having less of an aesthetic authority,’ says Jeff Willis, deputy head of department of communication art and design.

Student Benjamin Heathcote works in collage, drawing and photography. He uses the machine as a metaphor to represent a capitalist ideology. Blue Pastures 4, part of a series done in collaboration with fellow student Clare Oddy, demonstrates this. ‘My illustration explores the tension between the supposedly autonomous individual and the carefully, subtly, exquisitely controlled actual modern human. I am intrigued by the strange and sinister netherworld of the Internet,’ he says.

Tom Mower seeks to create what he terms as ‘some form of critically minded gesture’ through his design pieces. His pencil on paper drawing of three boxes showing the title First Aid, Second Aid and Third Aid plays on the socio-economic associations of the idea.

The visual representation of language is a recurring theme in the exhibition. Grit Hartung explores the relationship between language, type, coding systems and sound in his design work. He is concerned with looking at how different design approaches can be used to advance existing perceptions of language. Richard Sarson’s digital image, A Logical Pursuit of Beauty, also seeks to explore the mechanics that lie behind language. Kieran McCann looks at ways of developing narrative and argument through visual means. He is primarily interested in exploring the relationship between graphic design and journalism.

‘I consider design, like journalism, to be an editorial process of researching, collating, editing, structuring and storytelling. By taking a journalistic approach to design, I try to investigate and question subjects that have a wider social context,’ he says. 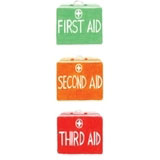 There are also many witty and subversive pieces of design in the show. Chiho Kato has designed a pocket-sized newspaper, which pokes fun at the current trend for smaller-sized newspapers. Simon Rickerty draws a cartoon-style, black-and-white android figure. Most of his ideas come from continuously designing in his sketch book, he says.

The communication art and design body of work is being exhibited alongside work by students from the animation, architecture, conservation, design products, history of design, fashion footwear and accessories, interaction design, industrial design engineering, textiles and vehicle design courses. Many of the pieces will be up for sale or commission during the exhibition.

For further details, go to www.rca.ac.uk.

• Sponsored by The Conran Foundation