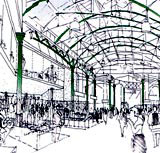 The long-awaited redevelopment of London’s Borough Market will begin in November if scheme designs by architect and designer Greig & Stephenson are accepted by the market’s Board of Trustees in six weeks’ time.

“The group is finalising ambitious plans to create a destination food market for Londoners that is synonymous with premium quality,” says Greig & Stephenson director Ken Greig. The development will include retail and wholesale food markets, permanent retail outlets, artisan workshops, bars, restaurants and a culinary school. The emphasis will be on organically grown produce and speciality foods.

Greig & Stephenson is scheduled to present scheme designs at the beginning of May and, if accepted, work will begin this autumn.

The project has already received planning permission. It is funded by a combination of private and public money, including grants from Southwark Council’s Conservation Area Partnership and the Government Office for London’s Single Regeneration Budget.

Borough Market is the capital’s oldest fruit and vegetable market still trading from its original site. In its heyday during the 1800s, it was known as “London’s Larder”. Greig & Stephenson’s plans focus on restoring its reputation as a centre for food excellence.

Greig & Stephenson is working on the entire project, from the physical structure of the buildings to branding, graphics, environmental and tenant signage and street furniture. It is also in early discussions about creating a website and will “probably” be charged with creating the overall brand manual, Greig comments.

The group has been involved with the project since 1995, when it won a Royal Institute of British Architects competition, sponsored by the Trustees of Borough Market to design a retail market on the site, while retaining the market’s wholesale traditions. Greig & Stephenson was formally appointed as architect and designer in the spring of 1999.

Its fee for design work as well as architecture will be finalised as part of the scheme designs, which will determine the entire cost of the regeneration project.

Greig continues, “[The scheme designs] will eliminate the risks involved in terms of costs of the site investment, as well as provide a detailed survey of the area and finalising its contents.”

The redevelopment plans centre around three main areas: Middle Road and Floral Hall, Jubilee Market and Green Market. The project has also received planning permission from Southwark Council to incorporate Covent Garden’s Floral Hall Portico into a new two-storey building on the corner of Stoney Street and Rochester Walk. It will have bars and restaurants on the first floor and retail or wholesale downstairs.

Middle Road and Floral Hall will be home to the core retail and producers’ market elements of the redevelopment. Jubilee Market will host the wholesale fruit and vegetable market and Green Market will be redeveloped as a landscape scheme for casual traders of speciality foodstuffs.

The vision for the overall scheme is to create a multi-faceted market that combines elements of Camden, Covent Garden and Nine Elms. Greig adds, “We want to create a destination for Londoners and a food brand in itself. Its brand values stand for the very highest quality food.”

Checking in with the high-flyers